Tiger Woods has been linked with several women, all claiming to have had an affair with him in this on going scandal saga. But the middle-aged blonde women who was taken to hospital this morning from Tiger’s home in Orlando may not be any of the mistresses he has been linked with. Various news sources have now confirmed that the women who was taken to the hospital was Elin Nordegren’s mother (Woods’ mother-in-law), and the young women who followed her ambulance in the black Cadillac was either Elin, or her twin sister Josefin. Elin’s mother flew all the way from Sweden for the comfort of her daughter in the time of need. 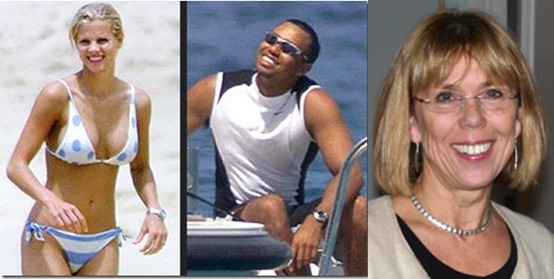 Barbro Holmberg is a Social Democratic politician in Sweden. She was married twice. Her first marriage was with Thomas Nordegren with whom she had three children: one son, Axel and twin daughters Elin and Josefin. Holmberg and Thomas parted with each other when their daughter Elin Nordegren was just six years old. Elin is married to Tiger Woods who is an American professional golf player, currently ranked as World #1.