Golf superstar, Tiger Woods, mostly remains in the news for what he does on the golf course. This time it is not due to winning some golf tournament, but rather due to losing a match on the home ground. The news of Tiger Woods car accident just outside his home last week, spread like a wild fire. While the alcohol factor has been isolated and the car was also not doing a speed where such injuries, face cuts and bruises could possibility have occurred, the rumor in question is about the fight, which he allegedly had with his wife Elin Nordegren. It was initially reported that Elin Nordegren used a golf club to hammer the back window of Tiger’s SUV open so as to help him out of the car. Later on it was speculated that Nordegren had used the golf club to beat Tiger up after hearing that her husband had possibly been having an affair with another woman, allegedly by the name Rachel Uchitel. 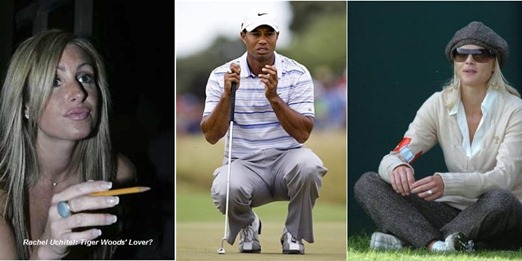 Rachel Uchitel is reported to be known for her desire to remain part of news. It was not that long ago when this lady was identified as the mistress of another person, actor David Boreanaz. Rachel Uchitel managed to grab the opportunity in spring this year when David’s wife Jamie Bergman was expecting baby. She met David  and they had an affair. According to sources, in the month of June, she had been involved in sharing of text messages with Woods and it is quite possible that she was having affair with David and Tiger, both at the same time. Rachel seems to be fond of having affairs with married men and in the process, manage to entangle them. Rachel’s alleged affair with Tiger is most probably the major cause of rift in relations with his wife.

Rachel on the other hand has refuted all these allegation and declared them baseless. She said:

This is nothing to do with me. The claims are completely false. We have never had an affair, talked on the phone or sent any type of text, sexy or not. I’m really upset about it because I’m being portrayed as a home-wrecker, when it simply isn’t true.

Elin Nordegren, 33 from Sweden, is married for five years to Tiger Woods, having two children of age two and nine months old. This domestic dispute is rumored to be the reason why Tiger left home that day before the accident took place.