We have been presenting you with all the latest scoops on the Tiger Woods and Rachel Uchitel alleged affair and his subsequent fight with his wife Elin Nordegren which resulted into a car crash in his hometown in Orlando, Florida. Rachel Uchitel being a night club promoter was no stranger to celebrities but this time she came in spotlight for being the woman responsible for destroying the family life of Tiger Woods and his wife Elin Nordegren. Her own life was turned into a serious suffering from the tragedy where her fiancé lost his life in World Trade Centre attacks in the year 2001. 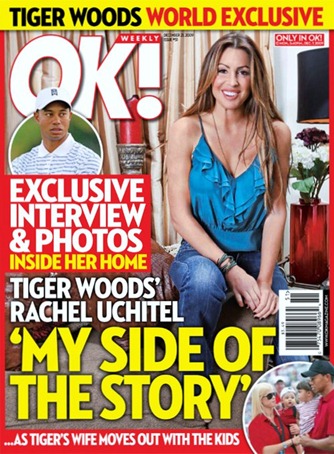 She was supposed to disclose her affair with the golf superstar Tiger Woods in a press conference which was scheduled to be held on 3rd December, but it was called off at the last moment. Rumors has it that she was paid a heavy compensation by woods for keeping her lips tight. But now, in the latest issue of famous magazine OK!, the only mag which Rachel had invited to her NYC apartment, Rachel revealed some truth about her side of the story in an exclusive interview. When asked that the media has been painting you as the “other woman”, and how would she describe herself? She replied:

In every story, you need a villain and a hero. I’ve been characterized as a villain. People have called me home wrecker, gold digger, tramp, whore. I make mistakes, but I’m not those things. I have very good qualities. When you’re judged by the nation, it’s really difficult. It’s horrible.