There is absolutely no doubt in our mind that robots are unashamedly cool. Now, yes, we know they might take over the world and go all T-1000 on us, but we’re a little way away from that just yet. After all, we’re only just teaching them to play iPhone games.

One YouTuber named Junya Sakamoto seems to have not only built his very own robot, but it’s one that’s capable of playing Puzzle & Dragons on the iPhone. And winning. 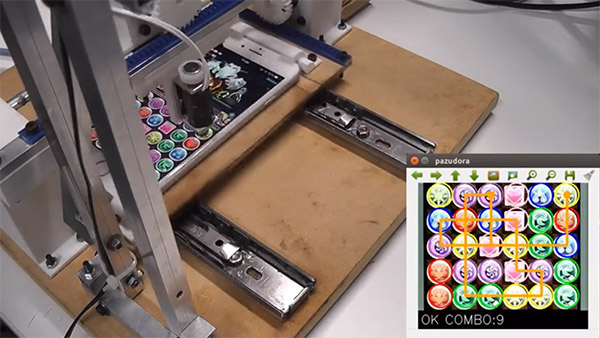 The homemade robot, which Sakamoto has created a video of from creation to iPhone-game-beating awesomeness, is even apparently capable of accepting commands via voice recognition, meaning no commands need to be manually entered for the robot to do its thing. That thing may only be playing an iPhone game, but we ask you – how many of you could make this thing come to life? I know I couldn’t.

For those unfamiliar with the title, Puzzle & Dragons requires gamers to match colored orbs to defeat monsters just like many other puzzle-oriented games. Patterns start to get more and more difficult as game time racks up in an attempt to give the game some longevity. Connected to a laptop, the robot attempts to predict the best action to take based on what the gaming board is presenting to it, meaning it can then work out the best way to get high scores. If you think you’re a Puzzle & Dragons wizard, then you ain’t seen nothing yet.

The video is only four minutes long and well worth that time even if you only have passing interest in robots and what they can do.

There’s another video by Sakamoto showing the robot responding to voice commands to wake and unlock the iPhone’s screen, launch apps, set and dismiss alarms, play a simple tune in a piano app, type out dictated text and draw Japanese letters in the Notes app.