Star Wars: The Force Awakens memorabilia and themed toys were amongst some of the hottest gifts during the holiday season. Sphero pretty much managed to steal the show with its amazing and extremely fun BB-8 Droid that could be interacted with and controlled via an iPhone. The company has used the annual Consumer Electronics Show (CES) in Las Vegas to capitalize further on the Star Wars and BB-8 hysteria by introducing the Force Band which brings in a new way to control that loveable little Droid; from your wrist.

The Force Band itself is a wearable device that looks instantly very similar to a smart watch. It takes the same form and function of a standard watch type device, but utilizes built-in internal sensors to offer its functionality. It connects to the BB-8 Droid and allows control of the Droid’s speed by hand elevation gestures, with the direction of the little BB-8 handled by orientation of the wearer’s hand. There are additional actions available, such as spinning in place to make the BB-8 spin, as well as turning your palm upwards to force the Droid to stare directly at you. 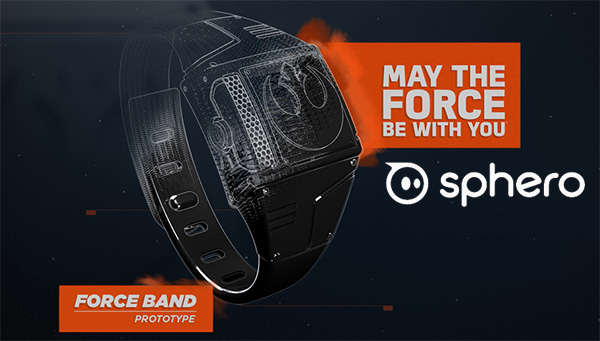 The existence of the BB-8 Droid that starred in The Force Awakens seemed like an absolutely perfect fit for Sphero. The company has made a name for itself over the last few years by designing and releasing ball-shaped robotic toys that are intelligently controlled through an iPhone. The progression to creating a small BB-8 replica with iPhone connectivity powers was simply the next natural progression. The introduction of the Force Band is a not only an attempt to keep the BB-8 Droid relevant beyond the initial Stars Wars: The Force Awakens hype, but yet another indication of the innovation that goes on behind Sphero’s doors.

The Force Band isn’t just notable by the fact that it offers an entirely new way to control the Sphero BB-8. It also represents the first full Sphero solution that doesn’t actually require any connected iPhone or smartphone to control the toy, meaning that the company now has its first standalone experience. There’s no official pricing available yet and the band won’t start shipping until April 2016. Do note that the band being advertised right now is simply a prototype, and the final product could look different.