If you loved Orbotix’s Sphero Robot Ball then the likelihood is that you’ll be positively thrilled with their latest introduction at this year’s Consumer Electronics Show (CES). The originally released Sphero was a quirky, fun and innovative smartphone controlled robotic sphere that provided hours of fun and entertainment. The latest edition to the Orbotix family is the Sphero 2B, a new cylinder shaped toy that takes on a slightly different form factor but still manages to pack in all of the fun and innocent glee that you would imagine a Sphero device would have thanks to its "mad speed" and "sick tricks".

Orbotrix’s official website for the gadget is describing the $99 toy as "awesomely agile thanks to its tubular design" and promising that it comes with the ability to not only whizz around on the floor, but to also perform high-speed tricks and jumps. The new addition to the smartphone controlled family has the ability to travel at up to twice the speed of the original Sphero release and integrates a whole new design system that allows for almost total customization by letting consumers swap out individual parts to tailor it to their own unique and colorful tastes. 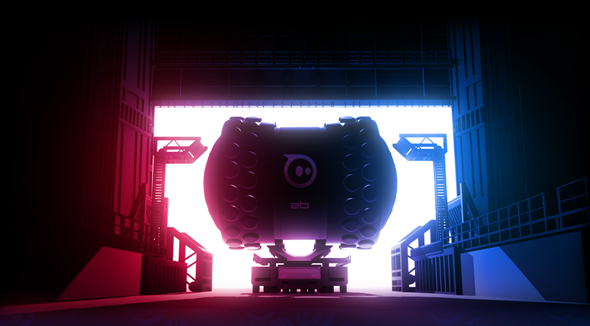 The ability to customize the little gadget is about more than just personalization. Having the ability swap out parts means that a variant of different wrappers can be applied to the tubular shell, offering varying levels of traction for different floor types. If the floor in your home or office is tiled, carpeted or even solid wood, then worry not as the Sphero 2B has a wrapper for all occasions. The manufacturers of the little gizmo are advertising that the 2B will be able to travel at speeds of up to 14 miles per hour while still benefitting from the same one hour battery life that made the original Sphero so enjoyable.

The robust outer shell means that the toy will be waterproof up to a "few meters" – although we wouldn’t be inclined to go testing that – and ships with Bluetooth LE that will offer a range of up to 30 meters from the smartphone that is being used to control it. When it actually ships, the device will be entirely programmable and will even come with advanced multiplayer games that will more than likely encourage friends and family members to get their own Sphero 2B.