The Consumer Electronics Show (CES), held annually in Las Vegas, Nevada, has always been an arena for companies to showcase their latest and greatest products. Some use it as an opportunity to introduce periodical updates to existing consumer tech, whereas others seize the chance to introduce a whole new product to what is essentially a captive technology loving audience.

Parrot, the company behind the much loved AR.Drone, is a regular at CES, often using the forum to introduce small adjustments and amendments to their quadricopter. Things are a little different this time around, with the company taking their appearance to a new level by introducing two new toys: the MiniDrone and the rather bizarrely named Jumping Sumo. 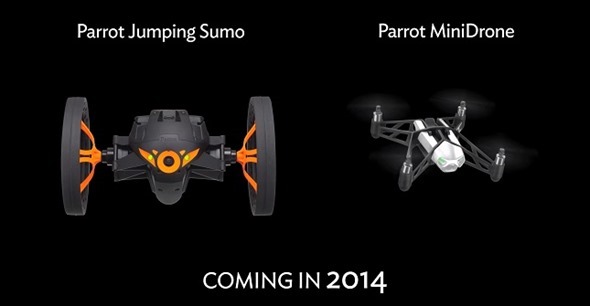 Parrot’s flagship product, the AR.Drone, has proven to be extremely popular with consumers over the years. Periodical updates have seen the flying, smartphone controlled quadricopter evolve slightly with improved camera upgrades, and more recently the introduction of new color variants in the form of the Elite Edition. However, there’s often been the criticism levied on the product that it is essentially nothing more than a toy for gadget loving consumers, with the downside being that it isn’t exactly priced at a point that makes it accessible to the majority. The newly unveiled MiniDrone looks like it could be Parrot’s answer to that problem. 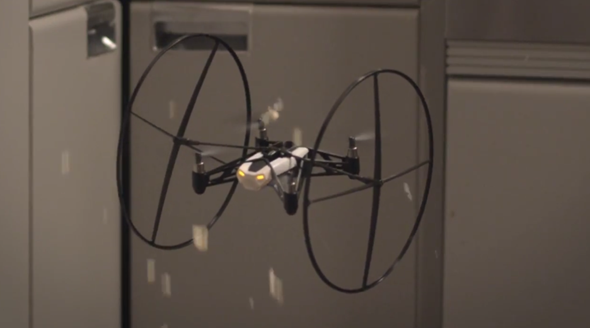 The MiniDrone is small enough to be held in the palm of your hand but you immediately notice that it takes a lot of inspiration from its ancestor. Like the AR.Drone, the MiniDrone is controlled using an iPhone app that allows the user to interact with the four on-board motors.

From a technical side of things the MiniDrone packs in an accelerometer, gyroscope, a downwards facing camera and an ultrasonic sensor to make sure that it remains balanced and in the right position. Unlike the AR.Drone, this is a more affordable variant that doesn’t contain a camera that is accessible to the end-user for video recording. 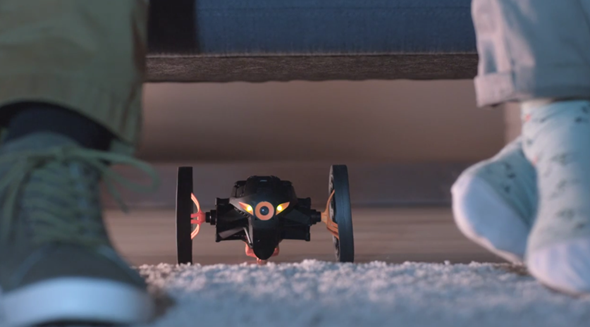 Parrot’s second offering, the Jumping Sumo, steps away from being marked as a drone. The vamped up toy car comes with two large wheels that are independently controlled allowing for lighting quick rotation. A built-in gyroscope and accelerometer allow the bizarre looking vehicle to be driven around, and an on-board QVGA camera allows the user to see everything from the car’s perspective directly within the smartphone app that controls it. Both of the new Parrot gadgets are currently in the pre-production stage with no final pricing announced.