Recording calls on iPhones has historically been a bit of a problem. While those with jailbroken devices have long been able to record calls by downloading a tweak, those who prefer their iOS experience to be a little more secure have had to suffer in silence.

There have been apps that record phone calls by using a custom dialler, but they can be flakey and importantly, they are simply no use when using an app like Skype or WhatsApp for your calls. 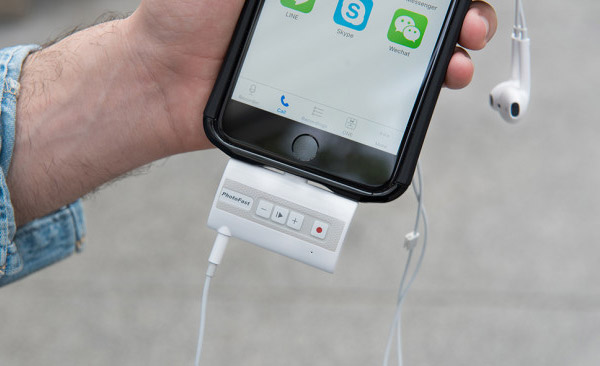 Put simply, recording calls on iPhones sucks, unless you use this $125 adapter called, unimaginatively, the Call Recorder. Available via the Indiegogo product marketplace, the PhotoFast Call Recorder is an adapter that plugs into an iPhone’s Lightning port and records calls no matter where they take place whether that be WhatsApp or the Phone app.

Calls are recorded in the M4A format and can either be saved locally to the iPhone’s internal storage or to a microSD card that lives in the adapter itself. The utility of the adapter goes beyond simply recording calls, too, because it also has a headphone jack on it so those with iPhone 7 series handsets can still use their old headphones, too.

If you want to get your hands on the Call Recorder, then you can order one now with an expected delivery time of around two weeks.

Indiegogo’s product marketplace is where things are sold that are ready to ship, or at least are complete rather than still requiring the whole crowd funding mechanism that made Indiegogo and Kickstarter so popular amongst those creating things as well as those on the lookout for the sort of things that simply wouldn’t have been made in a time before crowdfunding.