The Most Download Mobile Apps, Games Of The Past Decade

With 2020 just around the corner, App Annie has taken a look at all of the biggest apps and games that were downloaded from 2010 onwards. The results make for interesting reading, although it’s fair to say that some of the names are absolutely ones that you would expect to see.

App Annie’s data is based on information from the App Store and Google Play Store from 2012 onwards, with the App Store the only source of data up until the end of 2011.

As you would perhaps expect, Facebook and Facebook Messenger are the two most downloaded apps from the last ten years, and with WhatsApp and Instagram rounding out the top four, Facebook has a lot to shout about here.

As for games, again, there are some names you might expect as well as some that you’ve probably forgotten about, too.

But when it comes to spending in-app, things start to take a turn. Back to apps for a minute, the apps that made the most money are predictable to a point. Netflix and Tinder take the top two, for example. 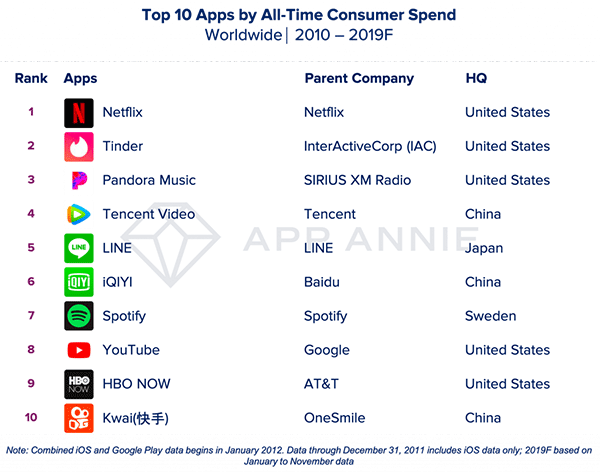 Spending in games was very much a who’s who of in-app purchase masters, with Clash of Clans taking top spot.

And again somewhat predictably, App Annie reckons that the spending on apps will continue to grow, too.

This decade has been a time of remarkable growth for the mobile economy. With a 5% increase in downloads, and 15% growth in consumer spend (excluding third-party Android) year-over-year in 2019 this looks set to continue in 2020.

Eventually, surely, this bubble has to burst, though.