The iPhone Won 2019 Despite A Strong Android Showing From Samsung

A new report into the smartphone sales figures from 2019 shows that the year was very much the iPhone‘s, particularly in the United States, with Samsung having a particularly strong year on the Android side of things.

In the report shared by Counterpoint Research, global numbers show iPhones holding six of the top ten spots. That’s an epic showing, especially at a time where Apple’s iPhone sales are flat at best. The winners were the iPhone XR, iPhone 11, iPhone 8, iPhone 11 Pro Max, iPhone 7, and iPhone XS Max.

As far as Android is concerned, it was Samsung showing other manufacturers how it’s done. The Galaxy A50 was the top Android phone in the market, with the Galaxy A10 not too far behind. Both of those two phones are inexpensive offerings compared to flagship models, which is perhaps no surprise.

Rounding out the top ten were OPPO A5 as well as Samsung’s Galaxy A20. Again, inexpensive phones besides iPhones and Samsung’s Note and Galaxy S handsets.

With the iPhone XR being the top-selling phone across the planet, it’s clear that the combination of cheaper phones and strong performance is a winner. The iPhone XR had the same internals as the iPhone XS, but with the use of a cheaper LCD screen rather than OLED. It also had slightly thicker bezels because of that fact. 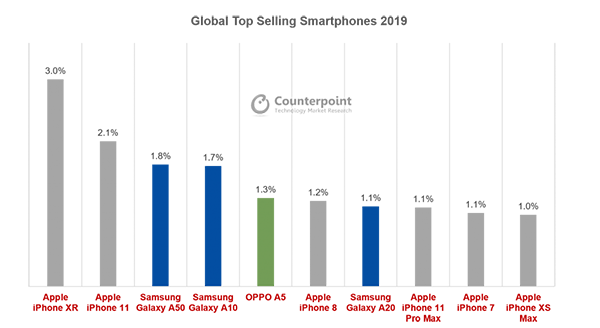 It was a poor showing for Google, though. No Pixel phones were in any of the top ten charts anywhere around the world. 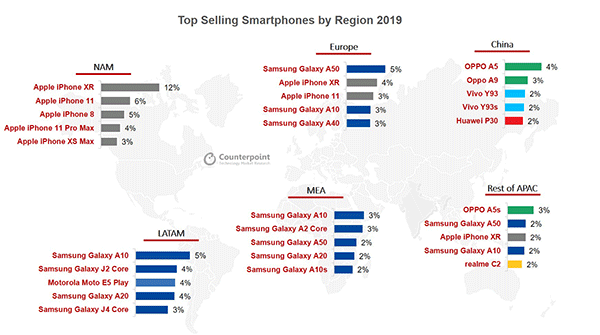