Apple has signaled the approaching end of the year by publishing its “Best of 2013” page on the iTunes Store. The dedicated page on iTunes concentrates on digital products which the company offers for users to purchase and download, including iOS apps, music, podcasts, books and movies. As well as listing the most successful consumer downloads of the year, Apple also outlined their own choices in each category by having an Editors’ Pick for things like app and album of the year.

When it comes to the App Store section, it isn’t a great surprise that Candy Crush Saga is sitting at the top of the free downloads list. 2013 has been all about the candy crushing, with iOS and Facebook users from all over the world eager to see how much money they can send King’s way through the use of in-app purchases. The top grossing iOS apps list also shows that Candy Crush Saga gamers were also ready to part with their cash to advance through the levels, with the game being the highest grossing app of 2013. 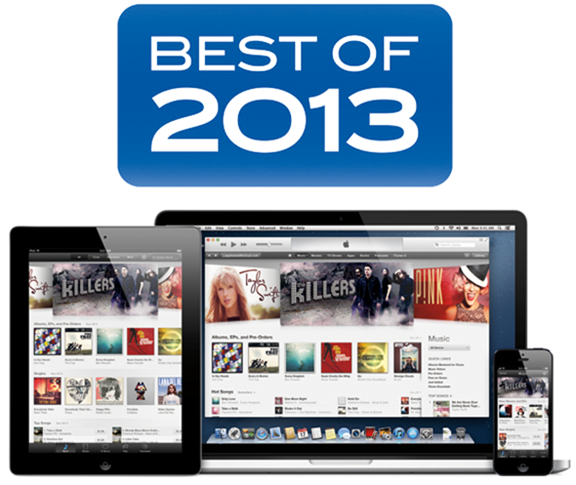 Mojang’s Minecraft – Pocket Edition managed to see the year at the top of the paid apps download charts, although it doesn’t make an appearance in the top 15 of the top grossing list. It is extremely interesting to see that 13 of the top 15 grossing apps of the year are games that fall under the freemium model, with the other two being dating apps. It seems 2013 was the year for singles to play mobile games.

The complete list of apps can be found below, broken down into sections for both iPhone and iPad.

iPhone Game of the Year

iPhone App of the Year

iPad Game of the Year

iPad App of the Year

As we know, iTunes isn’t all about mobile apps and also offers TV shows, movies, books and music downloads. Apple’s award for Best Family Film went to Despicable Me 2, with the Best Documentary accolade being handed to Gabriela Cowperthwaite’s Blackfish that tells the story of an amusement park Orca Whale that killed three people.

The Best of 2013 list appears to be broken down differently depending on which country you are in. Those in the United States will see that Mackelmore and Ryan Lewis’ The Heist was named best album whereas United Kingdom based individuals will see that the Editors’ Choice was handed to London Grammar for If You Wait (Deluxe Version).

If you want to see the complete list, simply head over to the official Best of 2013 page.