Twitch streamer Seanstream has broken the world record for most hours streamed in a month. The 33-year-old German gamer streamed a total of 595 hours during the month of November to trump the simultaneous 572-hour stint by fellow streamer Andrew “GiantWaffle” Bodine and the previous 569-hour record held by JayBigs.

During his world record run, the streamer spent his time on stream playing Star Wars Jedi: Fallen Order, Final Fantasy XV, Diablo III, and Anno 1800, among others, when he wasn’t chatting with his viewers. 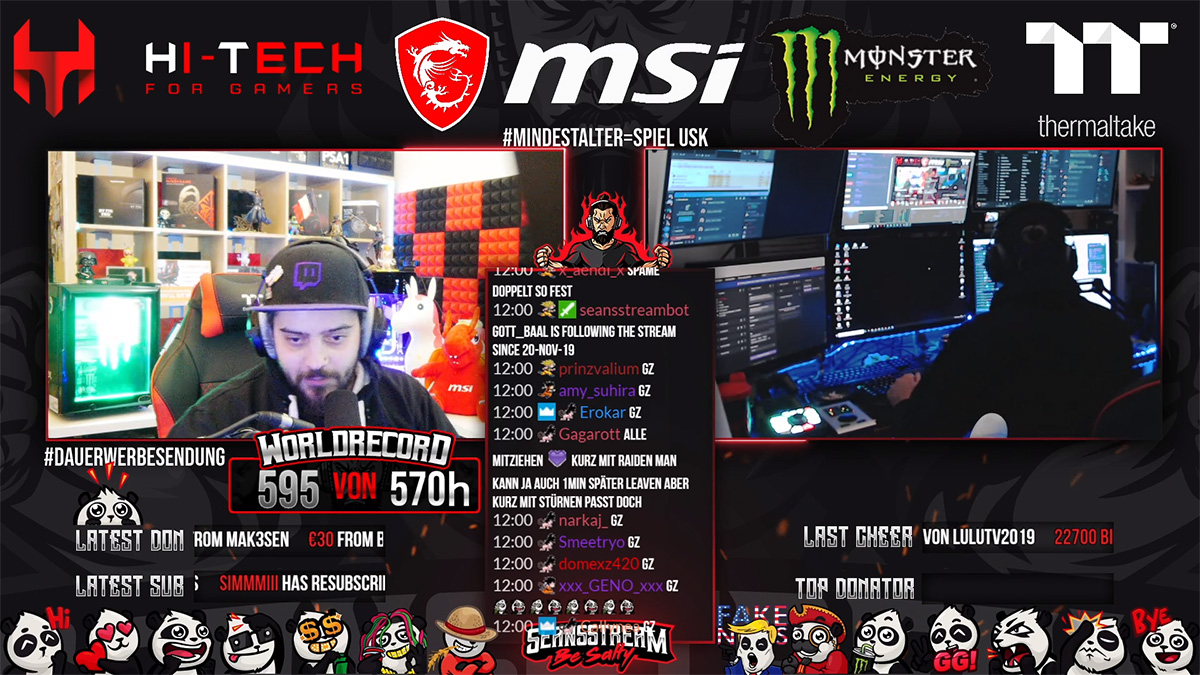 The streamer’s feat of perseverance may not sound like the most gargantuan of challenges, seeing as how he was, as many would put it, living the dream, playing video games or chatting all day. Any dream without moderation, however, may very well turn into a nightmare. The history of Twitch is rife with examples of streamers, especially those with a proclivity for marathon streams, struggling to keep themselves healthy during their daily grind.

Seanstream’s world record run too wasn’t without hitches. The streamer caught a cold during the month and had to give himself time to recuperate. He compensated for the lost time with multiple streams that lasted 30 hours and one that touched the 36-hour mark.

We reached out to the Seanstream to ask him what his biggest challenge was in completing the run. “Doing all of it in front of my computer, only on my desk,” he wrote in his reply. “I would never do that again. I would do it a little bit differently. I would install multiple cams in my living space and would take the stream, for example, to the kitchen. Even just normal sitting on the couch while talking to the stream would have been wonderful.”

So why put oneself through such long hours? Streaming platforms are, unfortunately, designed to favor talent willing to stay live for more hours, affording greater traction. This means more viewers, and possibly, more paid subscribers. The added stress and fatigue that accompanies such a work routine is a price many are willing to pay to stay ahead of the curve.

Seanstream’s impetus, he explains in his message to us, was snagging yet another world record. “I already had the record for the longest stream without a break (173h), which was also monitored by a physician,” he says. “I wanted to take it further and break this record.”

The streamer’s propensity to break records seems to have earned him the respect of his peers, with Bodine giving him a very flattering shout-out at the end of his own 572-hour “Streamvember” run.

“The guy’s a machine,” said Bodine. He is indeed.

I my gosh thank you so much bro @GiantWaffle you are breathtaking! If I go to twitchcon I need to hug you! So much love & respect ✊ to you! https://t.co/UuJ03PzVt0