SpyPhoto is a Cydia tweak which allows taking of photographs using an iDevice’s front or rear facing camera, without the need to open the Camera app. Added benefits include the fact that no sound is made either, meaning it’s great for when you’re on a top secret espionage mission, or trying to get photos of a prototype iPhone without Tim Cook’s cronies knowing. 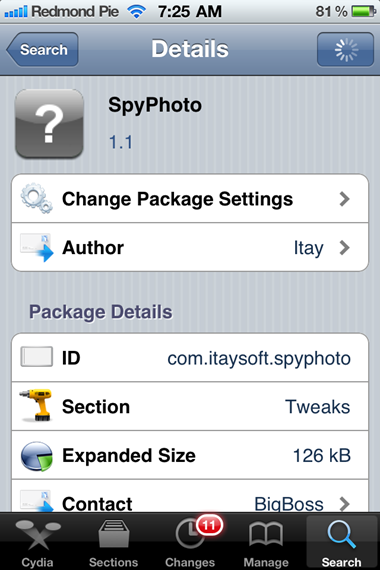 SpyPhoto’s real claim to fame is the speed with which it can take photos, and how it takes them.

Once installed via Cydia (SpyPhoto costs $1.50 of your hard-earned cash) and set up accordingly, the tweak can be activated using your choice of Activator actions. What this means is that you can then take a photograph from anywhere on your iPhone, whether you be checking email, browsing the web or playing a game. Activating the Activator action initiates the camera, and the photo is taken. The whole thing takes less than one second, which makes it the ideal way to snap those situations that would usually happen too quickly for you to launch the Camera app which, it has to be said, seems to get slower with each new iOS release!

New In This Version:
– Fixed Shutter Sound bug
– Picture should save now
– Separated in 2 gestures: back and front camera

While SpyPhoto is marketed as an app for taking pictures without people knowing, we think it would be put to much better use as a simple way to take photos in an instant, and from anywhere on your device. Not having to quit what you are doing, and then launch the Camera app, is a real boon, and something the app’s developer should probably be pushing a little harder.

At $1.50 SpyPhoto is probably with a punt if you find yourself missing out on photographs often, or don’t want to have to quit what you’re doing in order to take a picture.