Spotify has been updated with a new feature that borrows heavily from Apple Music. Now users can listen to their music while enjoying time-synced lyrics, too.

Those lyrics are provided by Musixmatch and work exactly how you might expect them to. Users play a song and sure enough, you can then follow along with the lyrics as the song progresses. Think of it as your very own built-in karaoke machine, if you will.

Spotify has reportedly been testing this very feature with a small number of people in recent months, but this is the first time that it has been rolled out to more people. As far as we can tell, everyone now has it, but let us know in the comments below if you’re still missing out.

The new feature also appears to be working on both Android and iOS, so this isn’t limited to anyone in particular. However, it doesn’t appear that the live lyrics are available on all songs just yet as spotted by Android Police.

Presumably, that is something that will improve over time. 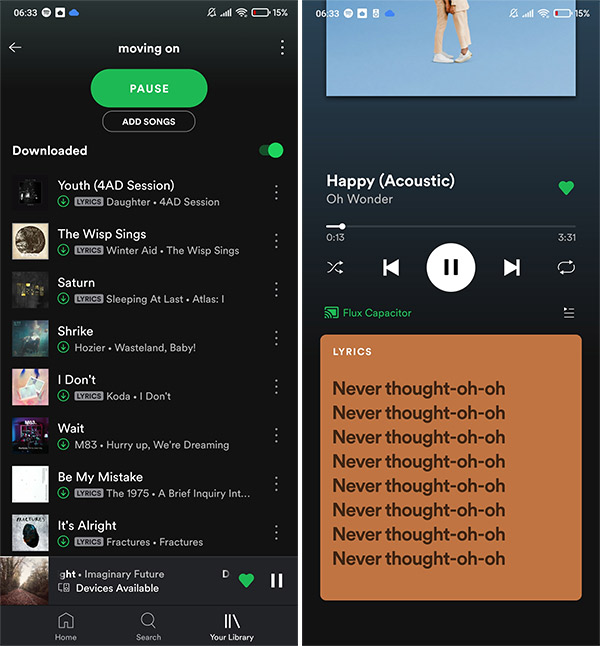 The full lyrics are provided by Musicxmatch, a service previously used by many to overlay lyrics on top of Spotify. They’re not available on all songs, but you should see a “Lyrics” indicator in playlists before the artist’s name to identify supported tracks. When you’re playing a song, swiping up to reveal what used to be the rather pointless “Behind the Lyrics” shows the full lyrics instead. You can then expand to view them on the entire screen. Lyrics scroll with the music, to help you sing along.

If you aren’t seeing the new feature just yet, try again later. It’s enabled server-side, so it might still take some time for everyone to get their hands on it.