There are reports flying around that Samsung might be looking to bundle a limited period free Netflix service for consumers with some of its devices. Read on after the jump for further details and learn why this news is bigger than it sounds.

Samsung is not new to such promotions and their teaming up with Marvel Comics for a scoop on the exclusive content on a Galaxy Tab S is testament to that. The brilliance of this latest purported deal from Samsung is not that you get a free Netflix subscription with the purchase of a Samsung device, but that the free subscription lasts for one incredible year; a time by which most enthusiast would have already dumped their brand new device for a newer one. 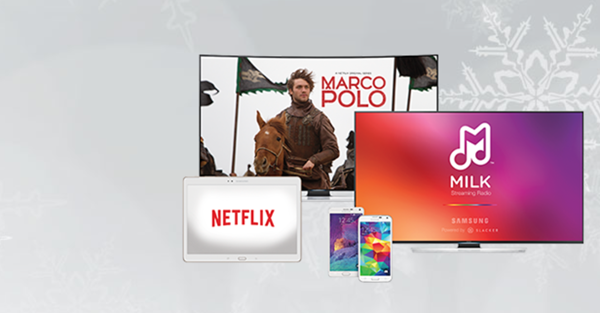 According to reports, the promotion initiative is set to hit the U.S. market starting a day from now on January 4, and will be lasting till January 17 with the aim of targeting the first 115,000 customers availing this opportunity. So the promotion may be wrapped up earlier than the stipulated 17th of January. The devices which will be up for bidding this promotion are purportedly the Galaxy S5, Galaxy Note 4, and the Galaxy Tab S.

In a photo of what seems to be a flyer from Samsung, the Korean electronics giant is promoting the three devices citing "a $100+ value – plus Milk Music". Samsung could be kicking up it promotion efforts by offering up this bundle with three mainstream devices in an attempt to enhance its reach to more and more consumers out there. 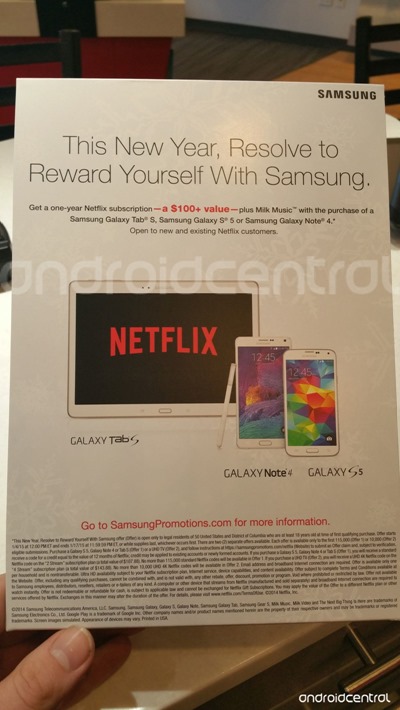 It is said that after a consumer has purchased the relevant Samsung product, a claim will have to be registered for the qualifying device on the SamsungPromotions.com website. When accepted, users will be eligible for an amazing one year of Netflix absolutely free; a service which is otherwise worth a good $100 roughly. To make this deal even sweeter for existing Netflix users, the credit earned through this promotion will be applicable to an existing Netflix account as well.

The 4th of January is not far away, and hopefully we should be seeing Samsung release an official information on this matter for interested Galaxy S5 users and more. If you had just bought a Samsung device, well maybe you want to grab another one for your significant other or yourself? For those who were thinking about getting one of these devices from Samsung, now would be a good time.