Keen to show businesses that there is a world outside BlackBerry Enterprise Server, Samsung has aired a new ad that it believes shows its own business solution as a real competitor for RIM’s. It may have fallen wide off the mark, however.

Samsung isn’t shy about sticking it to the competition in its ads, that’s been proven plenty of times when Apple was on the receiving end. Even Apple’s users have found themselves fair game, with the Korean firm pointing the finger at buyers of the Apple iPhone on plenty of occasions. 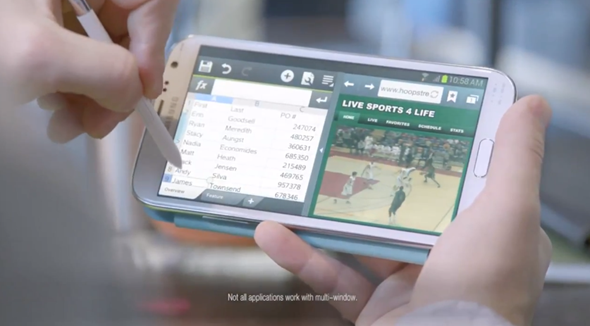 The latest multinational to find itself in the crosshairs of Samsung’s advertising department is RIM, the Canadians behind the once hugely popular BlackBerry brand. We say once, because RIM’s good days are well and truly behind it at this point, but that’s a story for another time.

If there’s only area where RIM is still hanging on, it’s the business world where it has historically been at its strongest. Even this stronghold is not as safe as it once was, and Samsung is looking to stick the knife in whilst the going is good. In typical Samsung fashion, it’s taken to the airwaves to make its point. Cue this ad that, in all honesty, is just a bit… weird.

Samsung is pushing its SAFE security system which it apparently believes is enough to make the enterprise ditch the RIM systems they already use in favor of a solution incorporating various Galaxy S III and Note IIs.

You’ll have to watch the ad yourselves, but what we will say is that it’s about time Samsung concentrated on its own hardware and software, rather than launching these thinly – and not even that sometimes – attacks on the competition. If anything, it detracts from the message as we’re now talking about the ad, rather than what it’s actually about. Samsung’s SAFE may be very good, but we don’t care because we’re talking about the ad. Not really the whole point of advertising, Samsung.

On the plus side, the ad does feature unicorns. And everyone loves unicorns, right?