A few decades back, likely even before some of our site’s readers were born, Walkie-Talkies conquered the world, both as war devices and later children’s toys. While no longer trendy, GroupVox is looking to bringing them back to life by adapting the same concept of two-way audio communication to Facebook.

There are many reasons why short voice messages are useful: they’re synthetic, easy to understand and still save the time that it may take to type up a text or a written Facebook message. GroupVox, now currently available on Android and soon to make its way to iOS and other platforms, uses Facebook’s messaging system to transmit short audio messages, either to another user via private messaging or even to group chats between multiple users via Facebook groups. 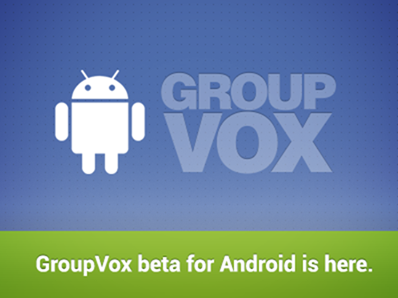 GroupVox is very easy to setup and does not require much initial configuration. Once it is up and running, all of your Facebook friends will be displayed as “Friends” on GroupVox. In order to get started, simply select a friend, or start a group chat, and simply press a button to begin speaking, then simply keep holding until you are finished with your message. Your message will then play on the recipient’s phone. If you owned a toy Walkie-Talkie growing up, you should feel right at home with this app.

It is a good idea to bring an old technology back from the ashes, especially as mobile broadband becomes more of a reality each passing year. This is a good replacement for text and voice messages, which are still quite costly and inconvenient given low price of mobile Internet. Since GroupVox uses Facebook as for broadcasting messages, it has great potential to grow in the future. Should more users take on this tool, it may just make audio messages a whole lot cheaper for years to come.

GroupVox is currently available as a Beta version for Android, although its developers have made it clear that iOS and Web versions will be available quite soon. We will be sure to keep you updated on these developments, but meanwhile, download GroupVox for Android here.