It is absolutely true that no flagship smartphone is without its problems these days. The Galaxy Note 7 famously caught fire on a whim. The Pixel 2 XL apparently has screen issues, causing image retention and similar visual problems, and now the Galaxy Note 8 is also said to be having problems of its own.

This time, they appear to relate to the display’s oleophobic coating, a coating that is designed to repel water and reduce the collection of fingerprints. According to a number of users, that coating is beginning to either peel off, or degrade significantly – often to the point of failure.

This has been pointed out across a number of Reddit posts, with users noting that the issue does not appear to be related to the age of the device. Some users report that the screens on their devices are showing signs of coating breakdown after just a few days, with photographs of the issue showing marks and striations around the area where the curved screen meets the metal body of the phone.

Noticed this today on my Note 8, phone is only a few days old so this cant be user wear. It also seems to be quite symmetrical. Only visible with fingerprints/smudges on screen. Does anyone else have this?

Samsung is yet to comment directly on the matter, although we suspect that anyone wishing to get a warranty replacement should not have too many problems in doing just that – we have heard of some users going that route and being provided with replacement handsets, although these too are said to exhibit similar issues. 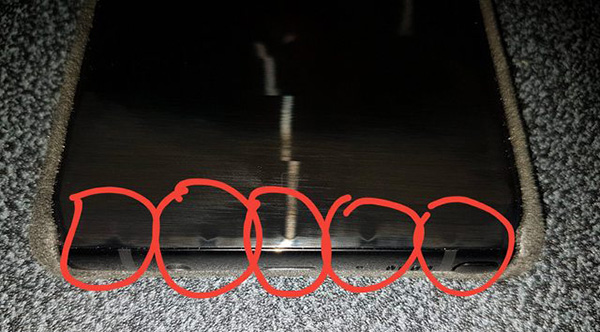 At this point, we do seem to be some way off this being a huge problem for the Galaxy Note 8 and we would most definitely not suggest it would be a reason not to pick up one of the best phones of this generation. That being said, if your Galaxy Note 8 is showing signs of oleophobic wear, we suggest getting it looked at, before it gets any worse.