Apple’s announcement of iOS 11.3 through its own Newsroom channel has definitely managed to achieve one thing; iPhone and iPad owners are now excited about this progression of iOS to be released.

Developers and registered public testers already have the ability to sink their teeth into iOS 11.3 beta 1, which begs the question, when will Apple release the second pre-release seed? 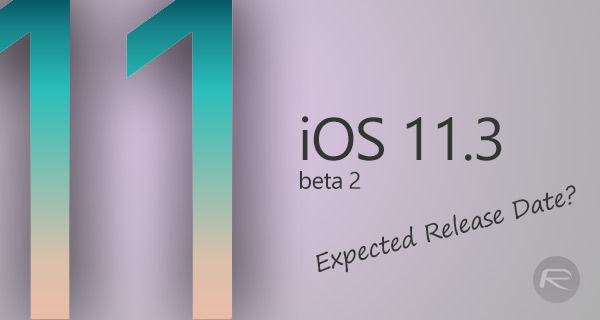 Typically speaking, Apple likes to leave at least two weeks between the release of the initial beta of a platform update and the subsequent second release. Betas after second and subsequent seeds usually have a week interval between them. This generally allows Apple to get the initial release out containing a number of the new and advertised features of the platform, whilst still being able to work on some improvements and larger feature additions in the background which will be released in the second beta, and beyond.

Where iOS 11.3 is concerned, this will likely include adding the new battery management features that have been so heavily discussed as part of the discovery involving Apple’s deliberate throttling of CPUs on older iOS devices with depleted batteries.

Keeping that information in mind, we estimate that Apple will push out the second pre-release seed of iOS 11.3 sometime around Tuesday, February 6th, which is approximately two weeks after the initial beta release. By then, Apple should have had enough time to not only take some of the received feedback and defect reports on board and make some fixes, but also add in some of the iOS 11.3 features which are yet to be implemented, such as the aforementioned battery management improvements and a potential redesign of the native Books app.

In case you missed it, Apple previewed the introduction of iOS 11.3 last week with an initial beta of the platform issued to developers and registered public testers shortly after. Those same developers and testers have not only been putting iOS 11.3 through its pace since that release but also ensuring that any issues, defects, or bug reports are issued directly to Apple to fix and implement changes which will hopefully be part of iOS 11.3 beta 2.

That expected date of Tuesday, February 6th, gives us all something to look forward to. However, if we expect that to change, or it Apple blindsides us all with an unexpected premature release, we will be sure to let you know.