It may have taken Apple longer than most to jump onto the OLED display train, but with the iPhone X it appears to have been able to reduce the impact of one of its biggest issues – burn-in.

While some other smartphone makers have found their high-end devices are prone to suffering a spot of burn-in, Apple worked hard to make sure that its iPhone X was less susceptible to the phenomenon, and it appears to have managed it.

Burn-in is an issue that befalls all OLED screens to a degree, but Apple said when it announced the iPhone X that it had worked to try and minimize the impact on its own implementation. According to a test carried out by Korean website Cetizen, the iPhone X fairs favorably when compared with the Galaxy S7 Edge and Galaxy Note 8 from Samsung.

Across a marathon 510-hour test, during which a static image was displayed on all three displays, the iPhone X was able to withstand the effects of burn-in the best.

The Galaxy Note 8 was the worst with a display which, after 62 hours, showed noticeable signs of wear. The Galaxy S7 Edge faired surprisingly well, too, but the iPhone X was clearly the winner here despite having initially started to show a minor amount of burn-in around the 17-hour mark. According to Cetizen, that level of wear did not noticeably increase with time. 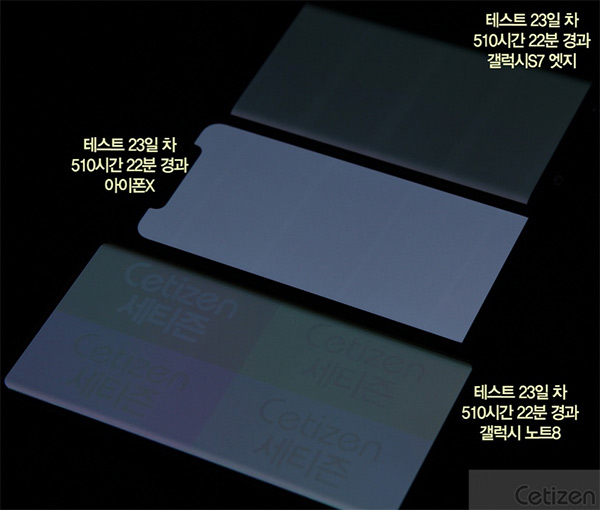 Apple advises that users try not to display static images on an iPhone X in order to reduce the opportunity for screen burn-in to occur, but with tests like this showing that the display is less susceptible to showing wear than others, users should not worry unduly.

It’s also probably worth repeating that even though Apple’s OLED in iPhone X was manufactured by Samsung, it was designed and engineered by Apple. Every detail that went into manufacturing was provided by Apple, hence why it has been touted multiple times now as the best mobile display in any smartphone today.