The Cydia store can call itself a home to a plethora of tweaks, themes, utilities and tools which are all designed to enhance, modify or provide extra functionality to iOS devices. Like the official App Store, Cydia is populated with some software which is extremely professionally implemented, but also has tweaks which cause more problems than they solve due to sloppy development and corner cutting.

I am pretty sure that any long term and regular jailbreaker will have their own list of essential tweaks which they install as soon as Cydia is available. I know from personal experience that whenever I jailbreak one of my devices I always install the same tweaks which I class as must-have enhancements. As users, we all appreciate a piece of software which makes our lives easier, so a tweak which increases productivity is always certain to be popular amongst users. On the flip side of that is the community’s love for innovative and aesthetically appealing modifications.

In the last twelve months a number of tweaks have been released which exist solely to provide an aesthetic enhancement to the device. Barrel, Motion and Graviboard are a few examples of work which has been widely adopted and resulted in praise from the community, even though they have provided no actual benefit other than altering the way application icons behave.

The latest tweak to be released onto Cydia which follows this pattern is by developer Adam Bell and goes by the name of Overflow. The keen eyed iOS users amongst us may be able to deduce the tweaks function from the name, but for those who can’t you may be pleased to know that Bell has brought flare and style to docked icons. 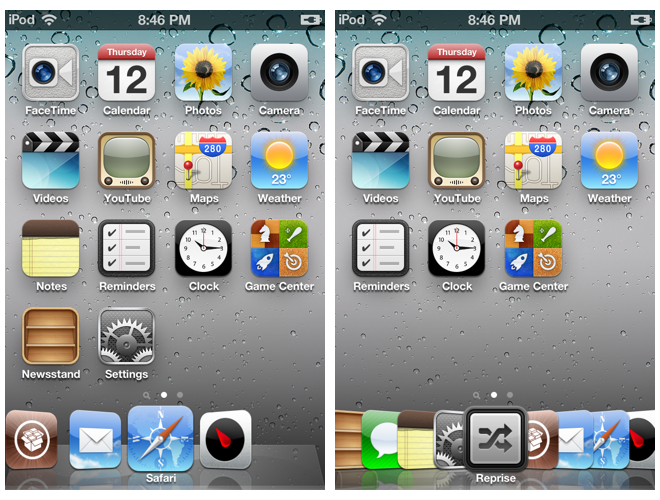 Installation of Overflow adds a dynamic effect to the docked applications, reminiscent of the cover flow style used when scrolling through the album artwork when in landscape mode. Overflow adds deep support for the Infinidock produced by Grant Paul, considering they both have in-depth functionality to the icons which reside in the dock. It seems like a good move by Bell to take advantage of the large user base who buy into chpwn’s infini tweaks. Although Overflow can be used as a standalone installation, to enjoy the full dynamic scrolling experience, the developer recommends having Infinidock installed with either five or seven icons placed ion the dock.

Although it may seem like such a simple thing, Overflow also comes with a settings entry which allows the effects to either be toggled on or off. As a user, the ability to determine whether the tweak is active or not is essential, especially when it is an aesthetic piece of software like Overflow.

You will obviously need to have jailbroken device to run it. For jailbreaking iOS 5 untethered, follow our complete step by step instructions posted here to jailbreak iPhone, iPad, iPod touch on iOS 5.0.1 using Redsn0w or Sn0wbreeze.