Running out of patience with the iPad 3 and iPhone 5 rumors? Well, then you have come to the right place, as today has brought about some new speculative chatter, this time pertaining to the capabilities of the expected Apple TV set. In the last ten years, Apple has been on a rampage with the sole mission of revolutionizing and improving the music, mobile and portable device industries and it would take a braver man than me to say they have succeeded in doing so, and then some.

The music industry was first up with the launch of the iPod range of devices back in 2001. The iPod changed the way the world listened to music on the go, and when coupled together with the iTunes music store, a new breed of digital content delivery was born. With over 5 years of successful iPod sales, it was the turn of the mobile phone industry to receive the Apple treatment. After two years in development, 2007 saw the launch of the original iPhone which roused consumer interest due to its innovative operating system, advanced features and the beautiful aesthetics. The iPad was the next device to be introduced to the world in 2010, and over twelve months later; competitors are still trying to produce a device which can compete with the first iPad, never mind the second generation unit released in March 2011.

Obviously as time elapses, the current iPod, iPhone and iPad range of devices will see updated versions being released around the world, with improved features and evolving designs, but what is next from the Californian innovators? Well, if the intense speculation is to be believed, 2012 will be the year when Apple enter into the television set industry with a release of their very own TV set. For those who haven’t been following the reports coming out of the tech world, this new ‘Apple TV’ is not to be confused with the existing iOS powered Apple TV 2G. This is an actual television set, which aims to bring a wide array of advanced features in high definition glory direct to our living rooms. 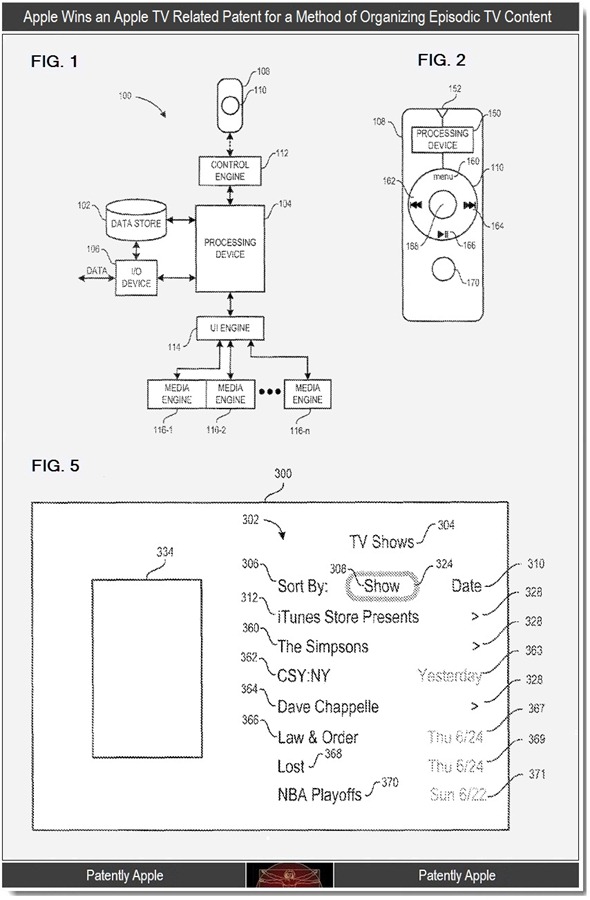 The United States Patent and Trademark office has recently published information which relates to a series of twenty two patents which have been granted to Apple, with one in particular being awarded in the name of Steve Jobs. The patent in question outlines the methods that the company may intend to use to effectively organize episodic TV shows and points to the fact that the new television set could have digital video recording (DVR) capabilities. The granting of the patent, and the type of device in question should almost certainly point to the unit have DVR functions, although any further information on the specification of the television set itself is pure speculation.

The patent itself was originally filed back in 2006, so has obviously taken some time to pass through and be awarded. But the rumors of recording abilities are strengthened by recent reports of Apple’s meeting with TV executives of a number of recording studios, presumably to discuss the potential for this device moving forward.