iOS Share Of New Smartphone Adopters Rises While Android Falls By Nearly 15%, All Thanks To The iPhone 4S

You could be forgiven for just automatically assuming that every mobile device user owns a smartphone of some sort. For the last 4 years I have become so used to being engrossed in my iPhone and upgrading each year to the newest device that I sometimes forget to stop and actually realize that not everyone has made that transition yet from a standard mobile phone. To the non-clued up user who is looking to purchase a new cell phone, the world of smartphones could seem pretty daunting with devices offering pretty much the same core functionality, with the difference being the software which powers it.

Just how do those newcomers to the market choose between the Androids, Blackberries, iPhones and Windows Phones of the world? One option could be to pick the one which sounds the best or looks the prettiest, but form and aesthetics doesn’t always mean function. Recently released statistics by Neilsen highlights operating system adoption rates by consumers who are choosing a new smartphone device. In the months leading up to the holiday period, the metrics show a rise in popularity for iOS powered devices, with a large percentage of these customer acquisitions being the iPhone 4S which was released on October 2011. 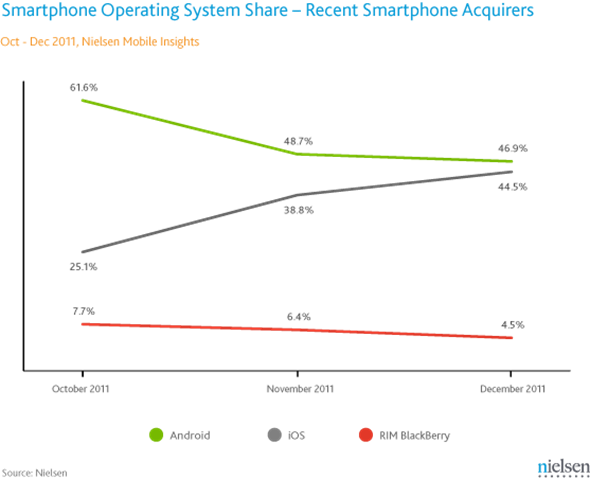 Since the iPhone 4S was launched, the number of customers have chosen to purchase the device has risen to 44.5 percent which is a substantial rise of 19.5 percent since October. One of the more interesting statistics to come from the report is the drop in popularity of Android powered smartphones as the total market share of new buyers has dropped from 61.6 percent to to 46.9 percent. It is worth noting however, that whilst the new adoption rate of Android devices seem to be on the drop, the OS still holds the highest total market share with 46.3 percent.

There will come a time when the only mobile devices available will be smartphones, powered by one operating system or another, but until that time; it looks as though the general migration rate to a smartphone is increasing with 60 percent of recent acquirers saying they are choosing a smartphone over a standard feature device. With 57 percent of iPhone purchasers opting for the latest iPhone 4S model, could it be due to the fact that Apple make such a big deal of their product launches and user familiarity is growing due to the consistent feel of TV advertising? It will be interesting to see next years statistics and the overall market share, that’s for sure.