If you ever take the time to sit and browse through Cydia you will find that the range of tweaks and modifications available for Jailbroken iOS devices is quite simple staggering. Cydia is a thriving platform that contains literally thousands of tweaks, modifications, themes and other utilities that can alter, enhance and generally improve your iOS experience.

One of my all time favorite tweaks available through Cydia is a fun tool called Graviboard, developed by Conrad Kramer. The honest truth is that the tweak doesn’t offer any real functionality, but instead exists purely as a technical show case as what can be achieved by digging into the iOS classes and methods and applying your own code. For those that don’t know, Graviboard makes the devices application icons become susceptible to ‘gravity’ through the use of an Activator based gesture. When applied the application icons fall from the top of the screen to the bottom and can be manipulated either by touch or through the use of the accelerometer.

A recent tweak release by developers J. Corbett and J. Einbinder, known as ‘Motion’ follows down a similar path of manipulating application icons but with an entirely different implementation. Motion is a tweak available for iOS 4 and above which allows a range of effects to be applied to the icons on an iOS device. The tweak is purely aesthetic, and although it doesn’t offer any real functionality boost it does look pretty awesome and is a very elegant implementation of a good idea. 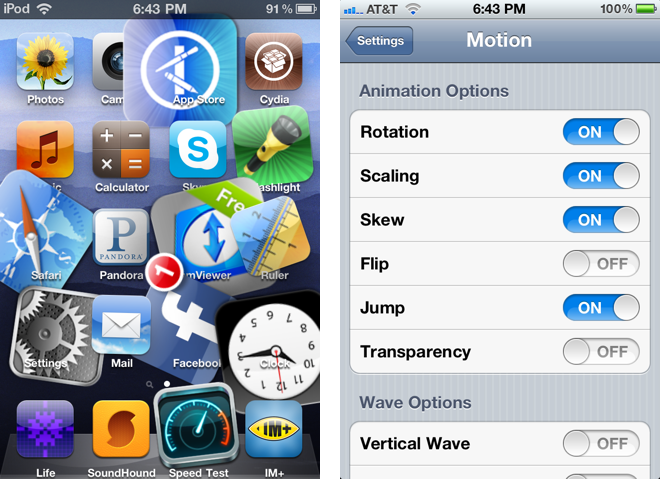 After downloading, Motion is activated by default and can be configured through a preferences entry in the native settings application. At the time of writing the following settings options are available:

The potential is obviously there for the developers to add more effects in the future should they see fit. Motion is a chargeable tweak, and I would imagine that if it is successful then additional options may be added. After using Motion on iOS 5.0.1 on an iPhone 4 for a few hours I experienced no problems whatsoever, with no boot loops or resprings resulting in safe mode. One of the great things about the tweak as well is that it randomly applies the effects to individual icons intermittently which makes for a pretty funky looking Springboard.

Motion is available on Cydia, via the Big Boss repository now at a cost of $1.00.