The company might be in the process of being sold to Microsoft, but Nokia isn’t going to sit on its hands and wait for the assimilation to happen. Instead, it’s forging ahead with its new product lineup and perhaps the most interesting new device to be on its way out of Nokia is the Lumia 2520 tablet.

The device itself has been leaking out of Nokia in spits and spats of late, with spy shots the order of the day. The latest leak comes courtesy of the folks at Evleaks, which means it’s much more interesting indeed.

This time, rather than a blurry photo, we’re being treated to a render of what seems to be a Lumia 2520 in what can only be described as a gorgeous cyan color. If there’s one thing Nokia knows how to do, it’s make a rather fetching cyan-colored piece of technology.

The render actually looks like an oversized Lumia Windows Phone, but the Windows button soon puts that idea to bed, though it does explain why Nokia decided to stick with the Lumia branding for its tablets rather than keep it for its smartphone lineup. 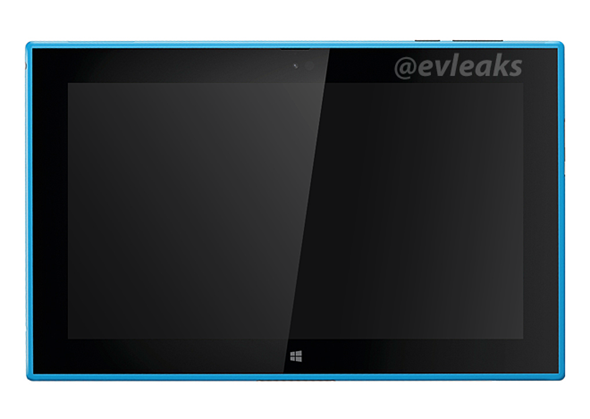 The tablet itself is expected to be announced on October 22nd in a Nokia event, which coincidentally is set to be the same date that Apple is expected to be announcing the new iPads – the iPad 5 and the Retina display laden iPad mini 2. That may unfortunately mean that Nokia’s device gets lost in the iPad-mayhem, but it shouldn’t. Rumors point to the 2520 packing a 1080p display and a quad-core processor from Qualcomm. Priced at $499, the tablet doesn’t seem to be too expensive on the face of things, and will reportedly be available in black, white, red and that lovely cyan color, the one which you see above.

The price point also speaks about the tablet’s OS under the hood, too. We’re certain it won’t be running Windows 8 / 8.1, and will be running Windows RT. Yup, the same OS from yesteryear which Microsoft has been struggling with to get in people’s hands.

All the focus is understandably going to be on Apple’s new tablets over the coming weeks, but if this render is any indication, they’ll need to go some way to be a nicer looking tablet than what Nokia has up its sleeve.