Twitter has always been a great source for information regarding upcoming technology and related innovations, and a recent tweet from Nokia is just another testament to that fact. The tweet in question features a teaser at a Nokia event on October 22, with the hash tag “innovation reinvented”, alongside the image that shows off something really exotic; desert skiing.

The tweet and the hints towards an event being hosted on October 22 goes in line with Nokia’s delaying of the launch of the rumored Lumia 1520 phablet until after September. Not only the timing is perfect, but also the claims that this event will feature something that will revolutionize that which is already extraordinary, which might well be Nokia’s PureView technology. The desert skiing image might only be a testament to the unusual choice of venue for the event, which is rumored to be Abu Dhabi this time around. Dunes, sand skiing, go figure.

If all of the above is believed to be true, this might be an indication towards something big. Of course, anything coming from a tech giant such as Nokia is usually big, and with Microsoft’s acquisition of Nokia, things are bound to get more interesting. At the same time, if we are to take hints from the #innovationreinvented hash tag, the Finnish company’s PureView cameraphone technology is still way ahead of what any competitor has on offer. If they’ve managed to improve on that, well, that’s a feat worth advertising in itself, and we won’t be surprised if that turns out to be the case.

Then, there’s the rumored Lumia 1520, which would be the company’s first venture into the phablet arena, and the first Windows Phone device to tread these waters. According to previous reports, this device will carry a 6-inch, true HD (1080p) display that will dwarf what all three Samsung Galaxy Note devices have on offer. It’s also rumored to be powered by a latest-gen Snapdragon SoC, and we’ve already seen that Windows’ Modern UI has been a hit on larger screens. Who knows, it might actually be true. 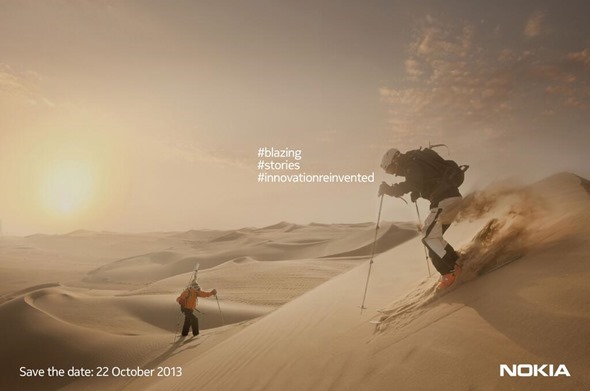 While at this point, all of the above is speculation and rumors, the indication that this event might be held at a location as exotic as the desert of Abu Dhabi, things might be looking up further for the Finnish company, and for the acquisition that Microsoft decided to go for. Since October 22 is not that far away, I guess we’ll find out pretty soon.