As we approach the festive shopping season, potentially one of Apple’s most lucrative sales periods in recent times, the Cupertino giant has released another TV ad focusing on the recently released iPhone 6 and iPhone 6 Plus. The video has been given the title “Voice Text” and follows hot on the heels of the fifth and sixth commercials featuring the voice and endorsements of celebrity A-listers Justin Timberlake and The Tonight Show host, Jimmy Fallon.

Apple has clearly been making the celebrity pair work hard for their money, with this seventh advertisement also featuring voiceovers from the pair. As the name of the ad might suggest, Apple is attempting to focus on one of the newest features added to the native Messages app with the launch of iOS 8; the ability to easily and efficiently send voice messages with any iMessage. As the video clearly shows, users are able to tap and hold the microphone button within the Messages app to instantly capture a voice memo that can be attached to any iMessage. 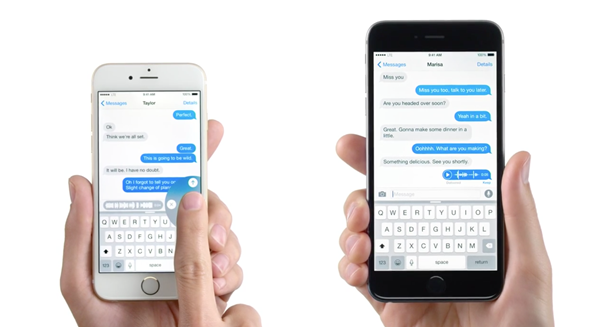 The quick thirty-second video shows the iPhone 6 and the iPhone 6 Plus side-by-side, but also adds a humorous slant on why having this audio sending ability can only be a good thing for iPhone users. As Apple puts it, rather than sending plain text to friends and family, users can utilize the newest feature to send clips of themselves singing or perfectly expressive sarcastic sentiment that sometimes gets lost with text. The feature is also perfect for negating the need to type out difficult to spell words, although the corrective text functionality within iOS 8 should also help with that, right Apple?

As part of its continued campaign to promote the iPhone 6 / 6 Plus and iOS 8, Apple has recently launched two advertising videos alongside one another. The “Duo” and “Health” commercials were originally aired during the initial launch event back in September, with “Huge” and “Cameras” coming shortly after with focus on the advanced camera functionality within the larger devices. Prior to the release of this “Voice Text” offering, “Gamers” and “Reservations” were the last two videos to be released side-by-side just a matter of days ago.

This may be the seventh advertisement to focus on the iPhone 6 / 6 Plus and its features, but it looks as though the Timberlake-Fallon connection will continue. It’ll be extremely interesting to find out if the addition of two popular celebrity figures has had any effect on the emotional connection that viewers of the videos feel with their Apple devices. Check the video out for yourself and see what you think.