There have been tons of rumors pointing to an Apple media event taking place next month with the iPhone 9, iPad Pro, and possibly a refreshed 13-inch MacBook Pro all possible announcements. But it looks like Target’s inventory systems might have already leaked some new products. And none of them are what we expected.

According to photos sent to 9to5Mac by those working at Target, there may be a host of new devices and accessories set to be announced. Alongside listings for “AirPods X Generation” priced at a massive $399, there is also a trio of new “Apple Watch Series X” bands listed, too. An “iPod Touch X Generation” is also listed, suggesting we might be about to see a refresh of the product everyone forgets exists. It’s also listed at $399.

Rounding things out is the “Apple TV Gen X,” which is priced at $179 – the same price as the 32GB Apple TV 4K that’s currently on sale.

All of these names are clearly placeholders, but the fact that they have made an appearance at all would suggest that they are going to be available within weeks. Apple has been rumored to have a March event planned, but none of these products were expected to receive any attention. However, an Apple TV refresh is certainly due.

However, while it’s possible that we’ve just seen new products leaked by Target, it’s also possible that these placeholders don’t mean anything at all. As 9to5Mac notes, that same inventory system still lists Apple’s AirPower wireless charging mat. And that’s been dead for a good long while already. 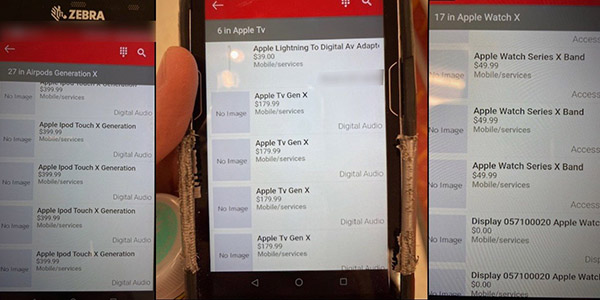