Microsoft’s DirectX programming API may, at times, have drawn criticism from the likes of AMD, but in a new announcement of DirectX 12, the software giant has outlined its intention to continue developing and improving it. The Windows maker has begun sending out invitations for the official unveiling of DirectX 12 at the Games Developers Conference (GDC) in San Francisco, which kicks off on March 20th.

Last year’s GDC saw the unveiling of DirectX 11, and this year, Microsoft will once again be showcasing the updates and enhancements made with DirectX 12. 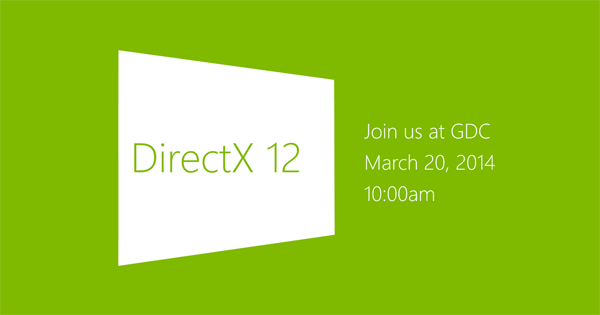 Aside from confirming the date of the announcement and the version number, Microsoft hasn’t given too much away with regards to what will actually be revealed come GDC later on this month. The landing page includes mention of chip makers such as Intel, Qualcomm and NVIDIA, with AMD – a long-time opposer of DirectX in general – also set to feature.

AMD hasn’t been the only entity to outline the flaws of DirectX, but it has been the most vocal, and while the likes of Project Mantle – which spawned thanks largely to the faction of opposition to Direct X – looks a more flexible, versatile and future-proof API, DirectX still clearly has a part to play in the matter.

When phasing out older technologies, there’s always a transitional period, at which point, there’s a conflict of opinion. The same happened with Flash, which is slowly being phased out in favor of HTML-5 and the like, but while AMD and others mightn’t be great fans of DirectX, that’s not going to stop Microsoft from pushing ahead with the twelfth version.

If anything, Microsoft is looking get one over on AMD and the Mantle gravy train, and while some developers have championed AMD’s forward-thinking, GPU-integrated APIs tailored to PC gaming, Microsoft wants to ensure that DirectX users can experience something similar when DirectX 12 makes its début.

Alas, as noted in the presentation notes of one of software maker’s GDC sessions, the company has sent this defiant message out:

You asked us to bring you even closer to the metal . . . so that you can squeeze every last drop of performance out of your PC, tablet, phone and console. . . Come learn our plans to deliver.

Fighting talk indeed; and whether there is a lingering animosity between Microsoft and AMD or not, it’s clear that the former remains intent on playing an integral role this industry for the foreseeable future.