For some reason, the tech world spends more time parodying voice assistants than actually using them, and just like when Siri and Google Now first arrived, we got a little excited about Microsoft’s Cortana earlier on this year at BUILD. Certainly, the software giant is every enthusiastic about the software, which is based on the virtual voice of the character from Halo, and with the HTC One M8 confirmed as releasing on Windows Phone, Microsoft has taken the opportunity to take a swipe at Apple and Siri once more.

When it comes to slating each other’s products, all of the biggest names in tech are at it, but given how late Microsoft has arrived to the party in terms of mobile software in general, it’s no surprise to see the Windows maker once again trying to make the news. But while there often tends to be a certain amount of nastiness to these side-by-side ads comparing features, Microsoft’s latest short is executed in a fun, humorous and light-hearted manner. 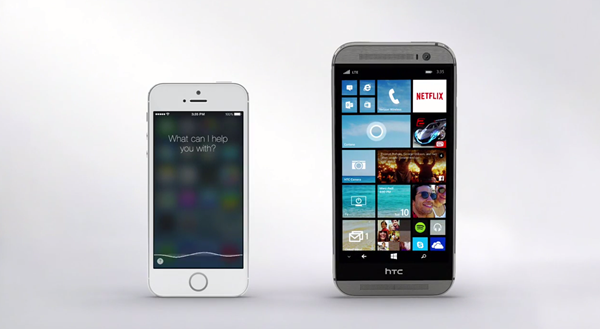 The ad begins with Siri speaking of how “nice” Cortana looks, and after lapping up the attention and explaining that the new look is that of the HTC One M8 on Windows Phone, Cortana goes on to talk about the device’s dual front-firing speakers.

The clincher arrives when a clearly taken-aback Siri responds with, “Oh, I only have one…. and I’m sitting on it!”

The HTC One M8’s BoomSound speakers have carried over from the very impressive HTC One M7 of last year, but while many regarded the M8’s predecessor as the best handset to release in 2013, it’s also arguable that the follow-up is a little uninspiring. The rear-facing camera – or should we say, cameras – are still as disappointing even with the fake bokeh, and it will be very interesting to see how the device fares on Microsoft’s still-emerging Windows Phone platform.

Even as a great admirer of Windows Phone, I couldn’t personally imagine buying a device like the HTC One M8 on WP over Android, but if Microsoft can continue attracting these high-end Droids to its line-up, it’ll do the ecosystem’s credentials no harm whatsoever.

Anyway, check out the rather entertaining 30-second clip embedded below, and do leave your thoughts in the comments.