Apple now offers an 8TB SSD as part of the Mac Pro configurator. Previously storage topped out at just 4TB although Apple did say that an 8TB option was in the works. No indication as to when that would be available was given when the Mac Pro went up for order last week.

As it turns out it took just over a week for 8TB options to become available, but as expected, getting such huge amounts of fast storage into a Mac Pro isn’t an inexpensive proposition.

Users upgrading from the standard 256GB configuration will need to pay an extra $2,600 to max out their SSD.

And while that does sound like a huge amount of money, chances are good that those opting for it are already spending a considerable sum on upgrading other aspects of the Mac Pro configuration, too.

That also means that the new maximum price that a Mac Pro can be configured for is a huge $53,799. But again, normal people aren’t buying these things and business accounts will surely handle the payment sides of things. In which case, anyone spending $50k+ on a Mac Pro will likely never see the money change hands anyway. 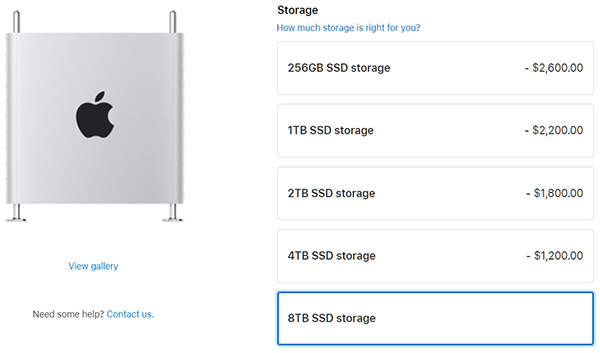 The new Mac Pro is starting to arrive in the hands of people who placed orders nice and early last week and initial reports are positive; as they ought to be really.