Redsn0w, the regularly reliable jailbreaking tool for iPhone and iPod touch users, has just been updated to version 0.9.9b9b, and brings with it a couple of handy finishing touches.

With the main focus of attention tending to be aimed at the upgrades in the actual software update from Apple, the progress being made on the tools that jailbreak them are often overlooked. It’s a privilege that we’ve so many willing developers working constantly to make the process of jailbreaking even easier, and the iPhone Dev-Team – the gang behind Redsn0w – have added many new functions which do exactly that.

It is now fully supportive of the latest firmware, which is iOS 5.0.1. Those who have jailbroken the dev-only release of iOS 5.0.1 will know that it required you to ‘trick’ it by pointing to the original iOS 5 build. That has all been rectified now, though, and Redsn0w recognizes 5.0.1 automatically, meaning; you don’t have to go through the fuss of pointing Redsn0w at iOS 5 manually then go ahead with the tether-jailbreak.

Another major feature which has been added to Redsn0w is the ability to downgrade from iOS 5.x for devices with SHSH blobs saved.

Those looking for an untethered jailbreak (which, we assume, is pretty much everybody), will have to wait for pod2g’s updates. He has been working very hard on it. We have already been updating you on his progress lately, and will continue to do so as he comes up with even more updates. Having said that, it could be weeks or even more, before an untethered jailbreak is released to public.

Those of you looking to take advantage of Redsn0w in order to jailbreak your updated firmware should head over to this guide. 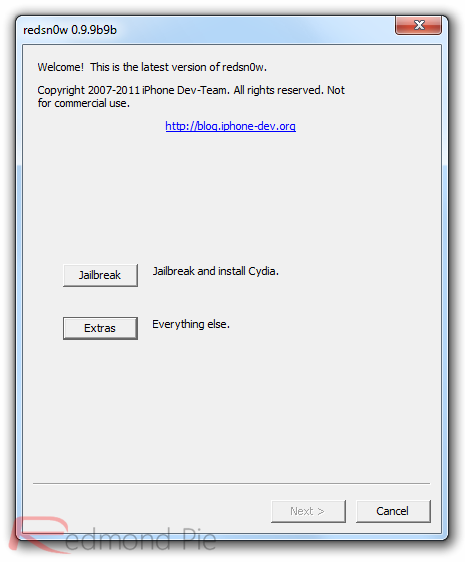