Apple’s iPhone X is so popular in China that it is accelerating the rate existing iPhone owners upgrade while also doing the same with the rate at which Android users switch to the iPhone as a whole, according to Morgan Stanley analyst Katy Huberty.

As reported by Yahoo Finance, Huberty also agrees with a previous report that stated the iPhone X rapidly overtook the lower cost iPhone 8, despite the latter having been released first.

Importantly for Apple, the analyst also believes that despite the iPhone X’s impressive start, there remains room for growth.

“Additional data show that iPhone X adoption in China is on a faster pace than the iPhone 8 and 8 Plus … Despite faster penetration of iPhone X vs. iPhone 8/8 Plus, we believe there remains significant pent-up demand from the base of 2+ year old iPhone owners,” wrote analyst Katy Huberty on Thursday. Huberty explained that nearly half of Apple users in China who have already purchased the iPhone X upgraded from the iPhone 7 and 7 Plus, leaving a long “runway” of customers with phones older than two years.

An important metric for Apple is the rate at which Android owners switch their smartphone over to Apple’s offering. In October, that sat at 6.7% but following the launch of the iPhone X, this rapidly increased to 9.2%. Considering that early iPhone X adoption was limited by the supply available to Apple Stores and carrier partners, it is possible that this figure could have been even higher. Stocks have begun to level out, however, with iPhone X orders on many major countries now shipping for next day delivery with handsets also available for immediate pickup in-store should buyers so wish. 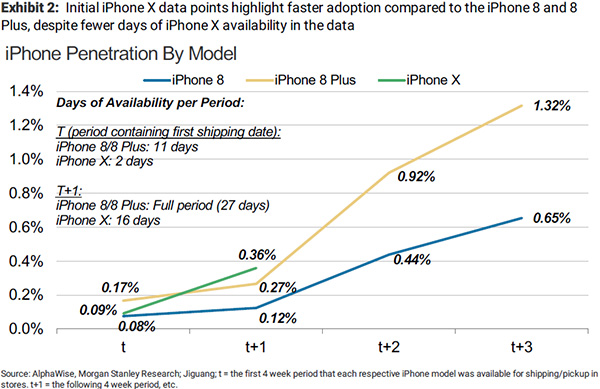 The iPhone X is the biggest iPhone revision in many a year, and buyers are voting with their wallets – if anyone wondered whether such a radical redesign would be popular among purchasers, they should now have their answer. 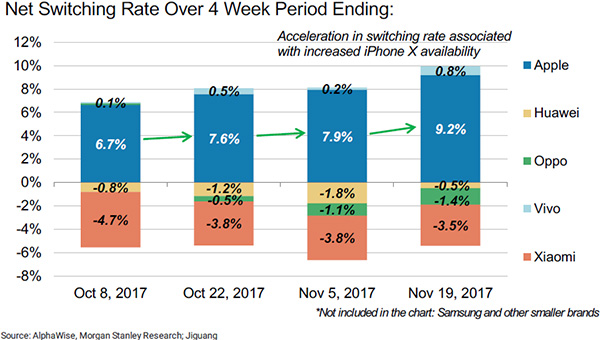