iPhone Users Get Twice As Much Sex As Android Users – Report

Here’s something interesting which might spark up your sex life. According to a research performed by OkCupid, iPhone users get laid twice as much as Android users. And so with that in mind, you now have yet another good reason to get an iPhone. 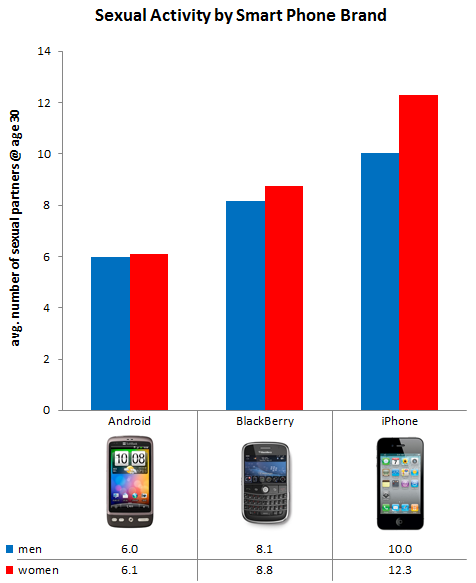 The chart above shows how often men and women using iPhone, Android and BlackBerry get to have new partners, and not so surprisingly, iPhone users tops the chart with both men and women getting to have twice as much as compared to Android users. The study, which was conducted by online dating site OkCupid shows that iPhone users approximately averages 11 partners by the age of 30, which includes 10 for men and 12.3 for women. In comparison, BlackBerry was second with users averaging 8.5 partners and those with Android phones were dead last with just 6 partners on average. Sample size of the survey was 9,785 people to be exact.

So who gets most partners in bed? The female iPhone users.

So, if you are into this kind of thing, now you know which smartphone to turn to, the iPhone. [via Gizmodo]