We are now well and truly into the realms of peak iPhone rumor time and today we saw something that reaffirms old rumors and a similar leak while putting it into something we can all understand – picture form.

No, we don’t have a photo of the iPhone 8 just yet but what we have been treated to today is a schematic that appears to show the rear casing of an iPhone 8, complete with cutouts for cameras and a rear fingerprint sensor.

Starting with the cameras first, while the iPhone 7 Plus came with a new dual-camera configuration for the first time, it does make plenty of sense that a new iPhone 8 would do the same.

What makes this drawing so interesting, however, is the rotation of those cameras, with them now being vertical rather than horizontal. The reasons for this are likely simply down to moving things around internally, with space needing to be made for the new rear fingerprint sensor.

That fingerprint sensor, assuming the hole we see below the Apple logo is indeed for a sensor at all, makes plenty of sense. Apple is expected to ditch the hardware Home button that has been a staple of iPhones for ten years with the iPhone 8, instead opting for an on-screen Home button similar to that used by Samsung in its new Galaxy S8. Samsung has also had to move its fingerprint sensor to the rear of the device, drawing much ire from fans, though the placement of the sensor on the iPhone 8 does appear to be more helpful to those of us with relatively small hands. 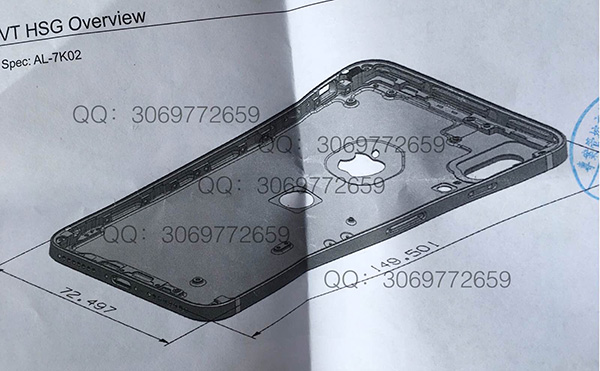 The dimensions shown in the leaked drawing do match up with previous leaks on the subject too, lending more credence to their validity. Given the source, notoriously well-connected Sonny Dickson, we suspect there may well be something to what we see here.

We’ll find out in due course, of course.