If you often look to the Weibo social network for China-based leaks of new devices and software, then you will likely be familiar with the frequent leaks of user KK Sneak Leaks. After having a notable amount of success in the past, the user has now shared a schematic and render of what is purported to be Apple’s upcoming iPhone 8, showing a device with minimal bezels, a virtual Home button with integrated Touch ID built into the screen, and a presumably OLED display which dominates the front of the device.

We’ve already been privy to renders and schematic drawings hinting at what the iPhone 8 could look like, and what features we should be expecting. Some of those leaks corroborate one another with shared predictions, whereas others suggest the complete opposite, meaning that there is definitely erroneous information flying around.

This latest leak shows a schematic drawing depicting a next-generation iPhone dubbed the ‘iPhone X’ measuring in at 137.54mm in height and 67.45mm in width, with the thickness of the new hardware not marked on the drawing. This leaves us wondering if iPhone 8 will take a leaf out of the new iPad’s book and come in slightly thicker than iPhone 7.

The schematic does however suggest that the diagonal measure of the iPhone 8’s display will be 5.768-inches, which is big enough to pretty much cover the entire front of the hardware, as the actual render of the device shows.

Keeping in line with previous leaks and speculation, that display dominance would allow for tiny 4mm bezels around the outer-edge of the hardware, with more than 50-percent of that bezel being taken up by the curved glass as it blends into the actual frame of the device. The Touch ID / Home button is also shown to be embedded into the display in exactly the same spot as has always been found in iPhone devices to date. 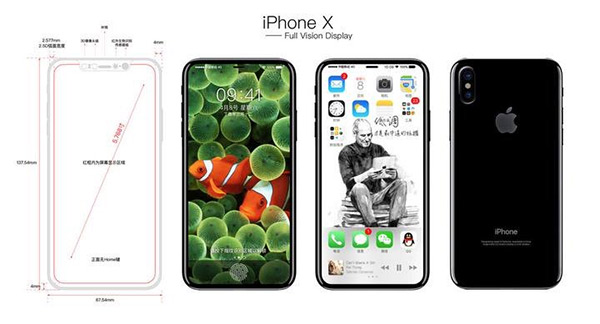 What’s particularly interesting is that if you take a look at the top of the rendered image you can immediately make out the earpiece that would be used to take telephone calls. This is also shown on the schematic drawing with a number of accompanying sensors to each side, which aren’t showing on the actual representation of the hardware. 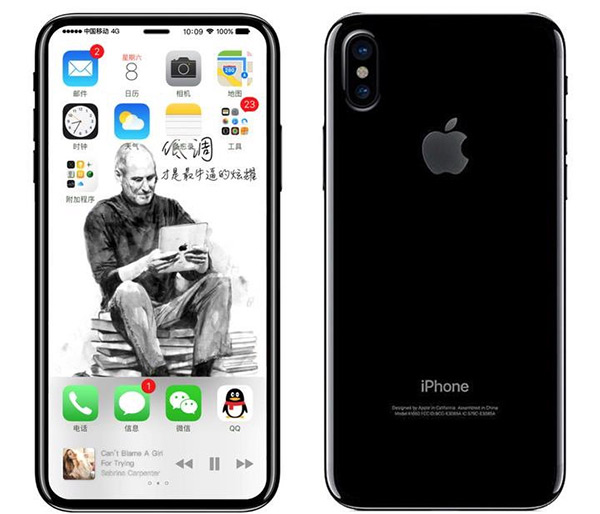 If accurate, then it is likely that Apple has come up with a method of ensuring that these sensors are embedded below the display, and are therefore invisible to the human eye. The images do also seem to suggest that the underlying iOS operating system would have its status bar placed exactly where the ear piece is, which leads us to believe that the actual device may not be exactly as depicted. 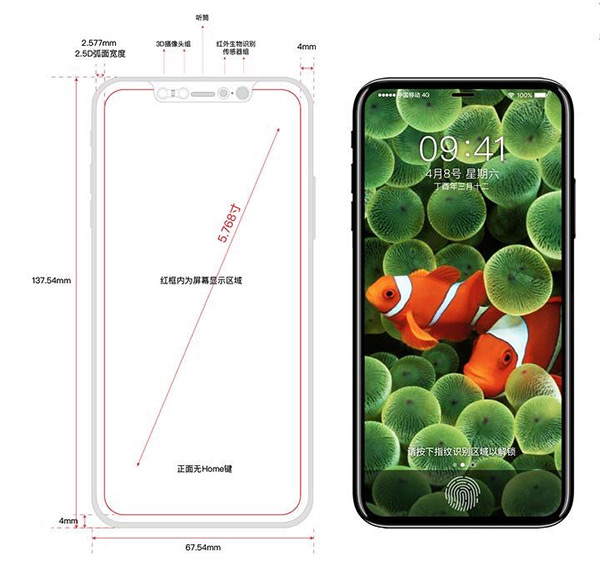 As is generally the case when we are a few months way from a reveal, it’s worth banking on this information but also remembering to take every leak with a pinch of salt until proven to be accurate.