A bounty fund setup in dedication to enticing developers to come up with a universal solution to get all iPhone apps able to run on CarPlay-enabled vehicles is making some seriously impressive progress, with the developer teasing a video clip showing Google Maps running on a CarPlay head unit.

As wonderful as CarPlay was made out to be by Apple it would seem that it’s becoming something of a neglected project. Sure, more and more cars are shipping with CarPlay capabilities on a manufacturer level, and additional retro-fit head units are becoming available to be fitted into existing vehicles, but Apple itself doesn’t appear to be giving CarPlay the love that the public would have hoped. 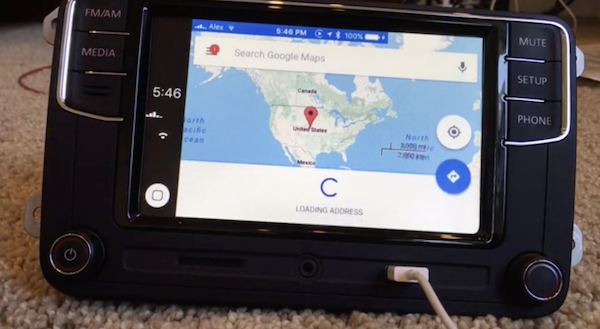 Part of the problem appears to be the fact that only a carefully curated selection of apps are allowed to run on the device, and even those have stripped back visual experiences. This bounty was setup to try and convince a capable developer to do something about that.

The developer in question has showed that his jailbreak tweak is making progress by sharing a video of Google’s Maps app working on a connected CarPlay-compatible head unit. The developer shows a number of pieces of functionality, including double-tapping to zoom, scrolling through the map with touch, and even drilling down into the granular details of a location signified by a pin drop on the map.

All as part of an effort to show that he has managed to come up with a way for jailbroken devices to cast any iPhone app across to CarPlay, rather than simply being limited to the few officially supported apps.

There’s still a fair bit of work to do to get this up and running in a position to share with the public, but the real goal is to ensure that any app can be used on CarPlay from a device running iOS 10, and it seems like he has so far succeeded in doing that.