With every passing day we are moving closer and closer to Apple’s official unveil of the 2017 iPhone lineup. We talk about the lineup as a collective as most people seem to purely focus on iPhone 8, and actually forget about the two LCD-based devices that will launch alongside it.

With that said, the high-end iPhone 8 is what’s likely to grab the attention, and leaks will continue to come over the next few weeks and months leading up to the launch in September, starting with this highly sketchy image purporting to be the official retail packaging for that new device.

We will start by suggesting that it’s not unusual to see leaks of the supposed packaging that Apple’s new hardware will ship in. Bizarrely, many would-be device owners actually get equally as excited about the exterior iPhone packaging as they do about the new and improved device inside. With that said, packaging leaks typically happen a lot closer to the actual device launch, with last year’s iPhone 7 packaging leak coming in September, which is the first tell-tale sign that this image may not be legit.

The image itself has been originally shared and pushed into the public domain via Weibo, with no real corresponding information to suggest where it has come from or who actually captured the photograph. The box itself shows what is alleged to be a black iPhone 8 complete with the vertically aligned iSight Duo camera that we have heard so much about over the recent months.

There’s also the standard Apple logo in the center and the text-based information on the bottom of the device that we are used to seeing with any iPhone release. However, the fact that it’s extremely pixelated and of poor quality is yet another concern of its legitimacy. 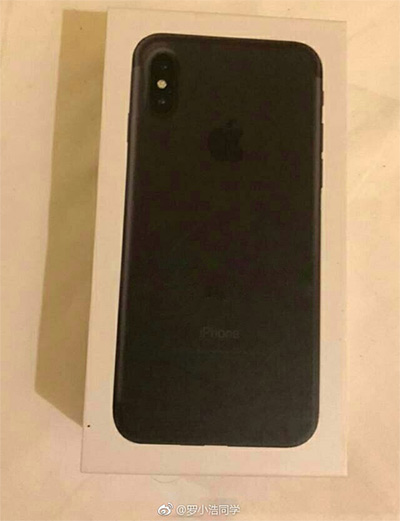 There is no real way to “guarantee” that this isn’t the real deal, but specific rumors over the last few months would suggest that we are looking at a Photoshop job here. We’re expecting an iPhone 8 with a glass back and a metal frame, but the picture shown on this box doesn’t seem to have that expected glass rear. We are also expecting a device with slightly elongated Power / Lock button on the side. Once again, these changes aren’t shown on the image shown.

You have to commend those involved for going to the trouble of publishing something like this, but we’re going to wait until the real deal leaks later in the year.