The Apple iPhone regularly scores high when it comes to customer satisfaction, quality of camera, and in fact, most other smartphone-centric research. These traits of popularity perhaps go some way to explaining why the fruit company’s flagship 5s was the most popular worldwide in the first quarter of this year, and moreover, why the antiquated iPhone 4s managed to grab fifth spot.

Apple’s main rival in the smartphone industry is Samsung, with the two titans regularly fighting in the courtroom as well as in the marketplace, but whatever your persuasion, the ABI Research sales figures for Q1 2014 show that both of these companies are head-and-shoulders above the chasing pack.

The iPhone 5s – specifically the 16GB variant – took the crown as the biggest-selling smartphone of the first quarter across the globe, with the Samsung Galaxy S4 running in second place. Given that Samsung’s then-flagship was nearing the end of its life cycle, finishing just behind Apple was actually no mean feat, and with the Galaxy S3 and LTE model of the Galaxy S4 occupying the third and fourth spots respectively, it’s clear that the wider audience isn’t necessarily blinded by the glamour of the latest and greatest.

The iPhone 4s, which is even more dated than the Galaxy S3 in the battle of the old devices, still managed fifth spot, and despite its age, it remains a fairly solid smartphone. There’s no LTE – this didn’t arrive until the iPhone 5 appeared in 2012 – but with a decent, 8-megapixel rear-facing camera and Retina display, still has enough about it to make some noise in the retail market.

Given that the Galaxy S5 dropped in April, it will be interesting to see what the picture was like for Q2, and although you would expect – given Samsung’s reports and the general acclaim for the device – that the Korean outfit’s flagship was the runaway leader for the second quarter, you also wouldn’t put it past the iPhone 5s to have made it a close call. 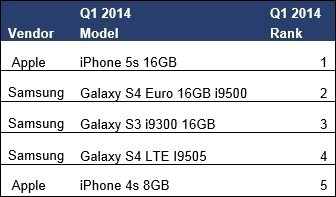 With reportedly two iPhone 6 models incoming alongside prospect of a high-end “Galaxy F” to accompany the Galaxy Note 4, it’s fairly likely that some of these smartphone models listed will be ousted from the top 5, although given the tasty devices poised for release from both Apple and Samsung, it’s unlikely that the branding of those most popular will change.