With the curtains closing on the stress-inducing pre-Christmas rush, shoppers are desperately panic-buying those last minute gifts, and as we know, tech products from smartphones to games consoles are seldom absent from wish lists. 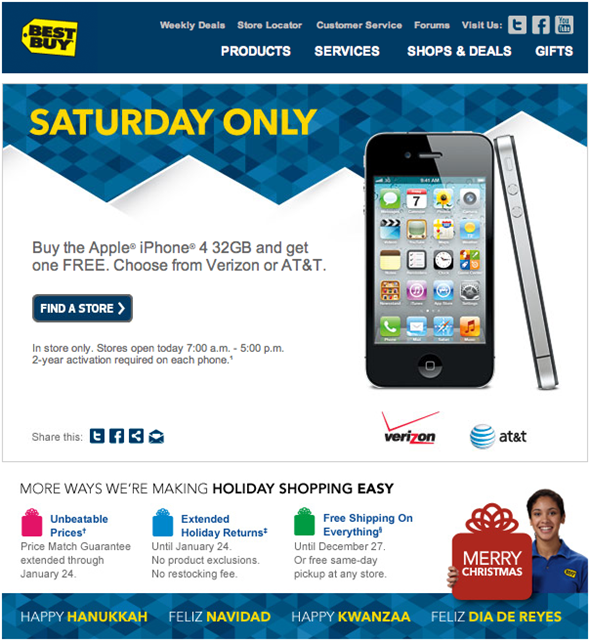 Although the sales and price-slashes tend to begin on Boxing Day and continue throughout January, Best Buy is already bearing gifts for technology fans, offering more than decent savings on the now officially discontinued 32-gig iPhone 4, which is now two-for-one on contract.

With Apple desperate to nudge consumers in the direction of its latest and greatest iPhone 4S, the only version remaining of its long-standing predecessor is the newly-introduced 8GB model which, while sufficient for general users, just won’t hold enough music, video and apps for tech-orientated folk like us.

If you’re one of those disorganized people who’ve not yet managed to get those gifts well, you should have done your Christmas shopping much earlier. But hey, we’re not here to lecture, only to inform, and ideally, if you plan to buy two smartphones as gifts (or one for yourself – there’s nothing wrong with a personal buy or two at this time of year), then hurry on down to Best Buy and grab your two iPhone 4 32GB models – usually $199 each -  for essentially a hundred bucks apiece.

Obviously, you will have to sign up to a contract, which will tie you down until Christmas 2013. But hey, there isn’t a better time to get an upgrade than the festive season; and who knows – maybe by then we’ll be onto the iPhone 6 or beyond.

Since the fruit company no longer produces the device, it’s first come, first serve, and only available while stocks last, so get in quick to avoid disappointment. It does NOT apply to online purchases, but then again, if you’re doing your late shopping online, you are very unlikely to receive them in time.

As a side note, it’ll sure be interesting to see how the titans of tech have fared once all the turkey and mince pies have been consumed. The smartphone/tablet battle is as fierce as they come, and with Google execs constantly boasting of several hundred thousand activations per day of Android devices, we could be in store for some tasty savings as the big three mobile OS’s look to draw in new custom.