There are 39 days left until Christmas! Most U.S. stores are skipping Thanksgiving altogether and placing holiday banners and decorations throughout their stores. If you haven’t made your Christmas list yet and are stumped on what to buy, you’re in luck! 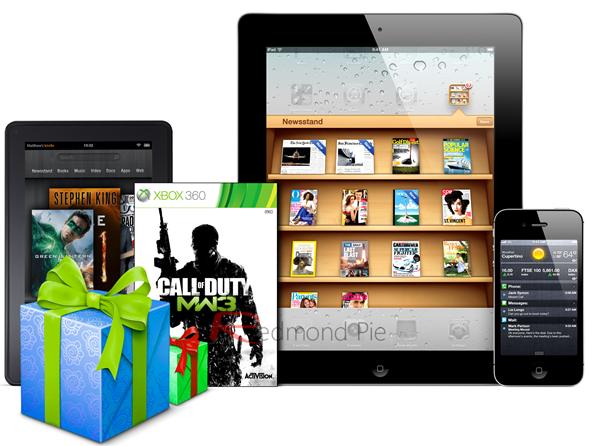 SodaHead.com, an opinion-sharing community, has released the most wished for tech gadgets. 1,150 readers cast in their votes and the results may surprise you. Leading the bunch with 39% was the iPhone 4S. Apple maintains their popularity in second place with the iPad 2. The newest tablet by the Cupertino company brought in 32% of the votes. In third place, the Kindle Fire, brought in 17% votes. The Xbox Kinect ranked last with 13% of voters adding the motion-controlled device to their wish lists.

Since three of those devices run apps, would you prefer some of them as Christmas presents? Personally, I’m not sure if I’d like Angry Birds as a gift and the voters agreed with 59% against the idea. Still, that leaves 41% that weren’t opposed. As picky as I am selecting apps and as frequently as I swap them out with better ones, maybe an iTunes gift card would be the better idea. I can always use them for songs or movies if I can’t find any I like.

As far as e-readers go, the iPad was ranked with the number one spot with a whopping 65% of readers preferring it to the Kindle Fire, ranking second at 24%. Although the newer Nook by Barnes & Noble was recently announced, it didn’t fare so well. Only 11% of the pollsters chose it as their e-reader of choice.

Gifts are getting smaller this year! Readers where asked what kind of gifts kids would enjoy this holiday season. Video games ranked first with 51%.  So many new games, so little time: Batman Arkham City, Modern Warfare 3, Skyrim, and Assassin’s Creed, Oh My! Miscellaneous tech and computers came in second at 32%. Toys and games only brought 10%. Music and Movies was ranked last at 8%.

How about cash? There’s nothing like a little bit of green to match the Christmas tree. Most of the voters, 74%, thought that Christmas was too materialistic.

If you haven’t started your Christmas shopping yet, don’t worry. When asked when voters usually started raiding stores, 59% chose after Thanksgiving.

The infographic by SodaHead shown below shows the most wanted tech-related gifts for Christmas 2011: