iPad is all set to launch in US on April 3rd, with pre-orders starting from March 12th onwards. There is growing hype about queries and inquest about this new device among the public in general, and the potential buyers in particular. Everyone wants to know, confirm and reaffirm everything before booking one on March 12th. 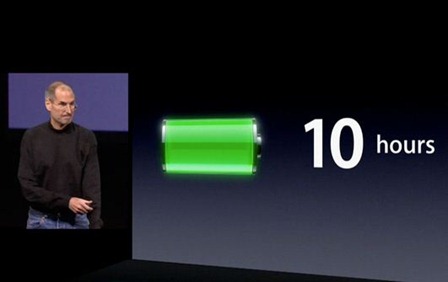 Steve Jobs has been busy answering emails this week. This time, Steve spared his time to respond to GCN’s John Breeden disbelief about the iPad’s battery life that was claimed by Jobs’ during his presentation on January 27 event at Yerba Buena Center in San Francisco. In his previous column last week, Breeden showed serious serious concerns and doubts about the iPad’s estimated 10 hours of battery life, in response to which he received lot many bad comments from Apple’s fans. Prior to responding to those comments, he thought it was rather appropriate to put the whole issue and his perspective to Steve once again for his final opinion.

I e-mailed him to say that I didn’t mean to imply that he was lying during his iPad presentation, as several people accused me of in their comments. People make presentations written by marketers all the time that are not 100 percent truthful, and it doesn’t make them liars.

Breeden further asked confirmation about one of the comment that was signed as “Steve Jobs”, and he got his answer:

Sent from my iPad

There you go! This smart, crisp, and to the point reply of Steve now shoudnt leave any doubt on iPad’s 10 hours of battery life. [via MacRumors and TiPB]