While details are scarce at the moment, it is said to arrive as soon as Apple releases final version of iOS 8.4 to public sometime this month, reports one Japanese site Tools4Hack.

Apple was apparently planning to release iOS 8.4 as early as Monday, June 8, right after WWDC keynote but decided against it at the last minute. According to 9to5Mac, iOS 8.4 release date is now tipped for late June launch.

iOS 8.4 is said to arrive with all new Music app which includes revamped streaming service based on current Beats Music, as well as much needed fix for that notorious bug which crashes Messages app on iOS and Watch OS.

There’s no word yet on whether or not this Pangu jailbreak demonstrated at MOSEC will be compatible to work with iOS 8.4. Chances of it working on iOS 9 are close to none though because of Apple’s new “rootless” security measure which will make jailbreaking very difficult to achieve. For more on iOS 9’s rootless security feature, check out: iOS 9 Jailbreak Will Be Nearly Impossible To Achieve, Here’s Why. 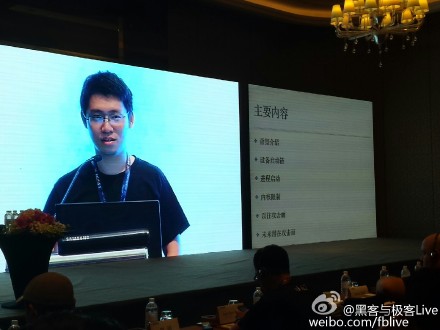 Team Pangu during their talk on iOS security, exploits and jailbreak at MOSEC.

As always, we will keep you informed regarding any update on iOS 8.4 public release as well as the state of team Pangu’s iOS 8.3 jailbreak. Stay tuned.