This Text Message Can Crash, Reboot Any iPhone Instantly

A recently discovered bug in Apple’s mobile OS means that anyone can effectively crash another individual’s iPhone, or send it into Safe Mode if jailbroken, by simply sending a SMS or iMessage containing a specific set of non-Latin characters. The bug, as discovered by a number of keen-eyed Reddit users, causes an iOS device to immediately crash and reboot upon receiving of the message, as long as the device isn’t opened in the same conversation thread in which the message was received.

As you might expect, the rather bizarre and difficult to find bug has been spreading around the Internet like wildfire since its discovery with individuals attempting to crash and hang the iPhones of friends and family all over the globe. Without any official statement on the bug from Apple it’s difficult to ascertain what the exact issue is, but it seems to be caused by the way that iOS has been built to handle and render Arabic text. And since iOS is adopted on the iPhone, iPad and iPod touch, all of those devices are likely affected when receiving a message of this nature through the native Messages app.

When an incoming message is displayed through Apple’s built-in banner alert notification system, or even directly on the lock screen if the device is locked, iOS makes an attempt to abbreviate the scripted message with an ellipsis as is standard when trying to shorten text in a container that isn’t big enough to display the whole string. However, it appears that if the ellipsis is placed in the middle of non-Latin script characters, such as Arabic or Chinese, it causes an internal error and forces the system to crash and reboot every time.

The string of text itself is as follows:

Because of the very specific nature of the text string that is actually required to be received by the device before a crash will occur, it’s highly unlikely that this will happen purely as an accident. With that said, there are a number of workarounds to resolve a rebooting device if the problem does occur. If the Messages app is reopened directly to the offending conversation then simply sending a reply to the message will resolve the issue. Alternatively, users can also utilize Siri to send a text message or a photo from Photos app Share Sheet to the sender to resolve the issue.

Here are some key facts which Reddit user that_c00l_kid has laid down: 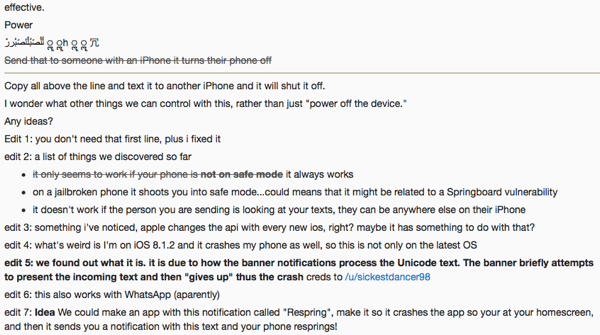 It’s certainly a strange bug and one that we will likely see an official response by Apple in the near future. In the mean time, if you receive a text that causes this crash then it’s highly likely that it’s from a friend playing a prank.

Update: We have now posted a dedicated guide with all the possible workarounds and fixes for those of you affected by this bug: How To Fix iOS Text Messages Crash Bug.