Wired video mirroring was first unleashed on the iPad 2 with iOS 4.3.x, but starting from iOS 5 beta, Mirroring went cables free via AirPlay but had certain limitations and didn’t work in some apps such as FaceTime.

Now starting from iOS 5 beta 3, you can mirror your FaceTime video calls via AirPlay on your Apple TV 2G hooked up to your gigantic TV! Yes you read that right, whenever you’re in a FaceTime call and feel a bit closed in on your iPhone’s small 3.5 inch screen, you can take a huge leap onto your TV via AirPlay Mirroring, isn’t that awesome?!

The ability to easily start a video call and beam it onto the big screen is compelling. Whether it’s grandpa and grandma, or the team in England, it takes FaceTime from a small, personal experience to a big, group experience at the touch of a button. 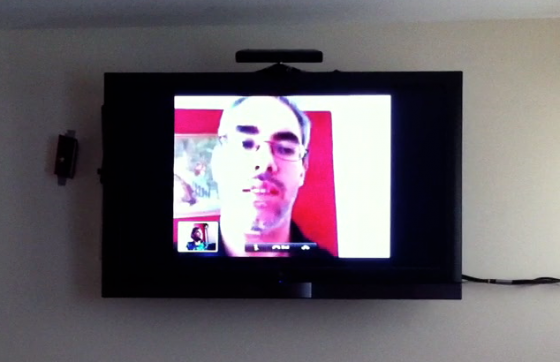 We’re quite surprised that back at WWDC, when Apple was announcing  iOS 5 and flaunting its features, they did not mention AirPlay Mirroring in FaceTime at all, maybe they felt that it was a “minor” feature compared to what iOS 5 really has to offer.

FaceTime was first announced back last year at WWDC when the iPhone 4 saw the light of day officially, since then Apple has been slowly and gradually adopting FaceTime on other devices. The iPod touch 4G was the second device after the iPhone 4 which inherited FaceTime, then the Mac followed, and now its on the iPad 2 as well.

AirPlay was also announced last year with iOS 4.2 which allows you to wirelessly stream your media onto other AirPlay compatible devices. At the moment, the Apple TV 2G is your best bet if you want a cheap media streamer for your content, and hey, it just costs $100!

With the discovery of AirPlay Mirroring for FaceTime in iOS 5 beta 3, it opens doors for developers to get their apps ready to take video calling on the big screen. Maybe services like Skype, Fring and Tango will follow the footsteps in the near future. And to be quite honest, we see great potential with this feature regarding small businesses holding long distance meetings, which would of course cut down costs significantly.