Here’s iOS 11 beta 8 for developers and public beta 7 for testers download and expected release date time info that you need to know about.

We are finally well and truly approaching that time when developers and public testers are looking forward to the next Apple pre-release seed, and also where the general public is counting down the days until new hardware drops onto the shelves running the full and final release of iOS 11. 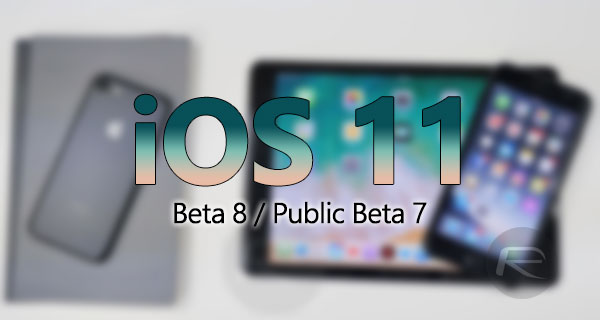 Given the pace at which Apple has been delivering betas of iOS 11, and the fact that it really isn’t long until iPhone 8 and iPhone 7s / 7s Plus are expected to launch, we can guess when the next release is coming with a fair degree of accuracy. Apple and its internal engineers set the stall out early on in the development of iOS 11 by releasing a single beta every two weeks. That release pattern provided engineers with enough time to fix a lot of bugs internally and be confident that the version going out the door had enough changes internally to appease those testing it.

As we’ve moved through these seeds, the major bugs have been fixed with many issues eradicated, leaving Apple comfortable enough to shorten that release period down to approximately every seven days.

Both of the last two betas have arrived on test devices approximately one week apart, which leaves us to believe that Apple will continue that release pattern going forward up until the Golden Master version is released at the end of the expected early September media event. If that turns out to be accurate, then iOS 11 beta 8 / public beta 7 should be packaged up and dispatched to developers on Monday, August 28th – exactly one week after beta 7 and public beta 6 seed. Both will likely be released on the same day meaning that developers and those registered with the Apple Software Beta Program will be able to test and interact with all new changes side-by-side.

Given how polished iOS 11 already is, and the fact that a number of people are using it with success on their main devices, along with the Apple’s expected early September media event to introduce the iPhone 8 which will likely see the release of iOS 11 GM, next week’s release could also be the final beta before Apple takes iOS 11 into that GM state.

The platform still has a few niggles with performance, but battery drain percentage issue and power management have been dramatically improved, as has compatibility with major third-party apps. Stay tuned, and get ready for that beta dropping this coming Monday.