The jailbreak community has been waiting in anticipation for Adam Donenfeld of Zimperium to drop a number of exploits that would allow iOS 10.3.1 users to downgrade to iOS 10.2 for jailbreak with yalu102 purposes. The release was expected ahead of the Hack in the Box conference due to start in Singapore today.

As yet, those exploits haven’t been released, but Donenfeld has now responded to a tweet putting forward his intention to release the exploits at the latest by tomorrow.

If you followed along with our previous coverage on the exciting topic then you will likely already be aware that Donenfeld and his Zimperium team are planning on putting forward a presentation at HITB Singapore titled “Ro(o)tten Apples: Vulnerability Heaven in the iOS Sandbox.” As part of the research and investigation into that talk and presentation, the team managed to use their combined expertise to find multiple impressive privilege escalation vulnerabilities which are not only perfect for this type of content but also highly useful in the right hands in the jailbreak community.

The furor around the privilege escalation vulnerabilities is largely due to the fact that they apply to all iOS devices on the market and are therefore extremely important to the jailbreak community.

Donenfeld had originally planned to have the exploits released into the wild by now, which would have allowed non-jailbroken users to downgrade from iOS 10.3.1 to iOS 10.2, which, in turn, would mean they would be in the luxurious position of using the stable yalu102 jailbreak to get a semi-tethered experience on their device. Full access to Cydia and compatible tweaks, would then be on the table. 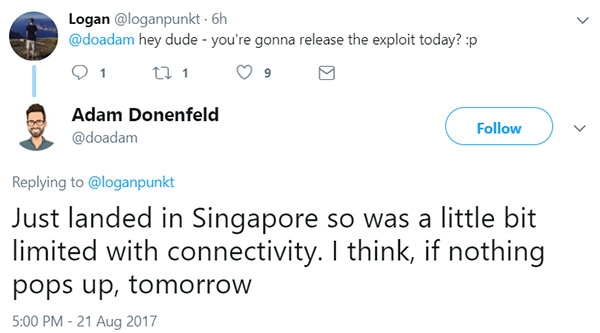 If the information posted in the tweet reply is accurate, then it would seem that travel plans and a lack of network connectivity have been the main hindrances in releasing the exploits into the public domain. Now that the travel is over, and Donenfeld is preparing for his talk later in the week with the rest of the Zimperium team, it’s highly likely that we will see the exploits released tomorrow at the latest. That essentially means that those with the necessary know-how should then be able to put together the necessary downgrade tools. As always, we will keep you updated on this. Stay tuned!