You can now download iOS 11 beta 7 IPSW, as well as beta 7 of macOS 10.13 High Sierra, watchOS 4 and tvOS 11 as Apple has officially continued the development of its major platforms by making available the seventh developer seed of the above mentioned platforms available.

The latest improvements and refinements are available to download immediately for all compatible iPhone, iPad, iPod touch, Mac, Apple Watch and Apple TV devices for those with an active Apple Developer account. 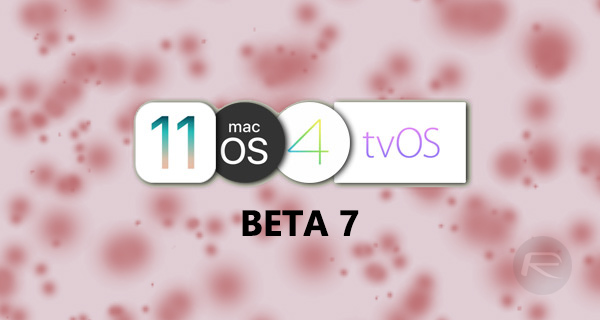 The immediate release of the aforementioned platforms means that the seventh beta is now available to download across all platforms on compatible devices, both as an installable firmware file from the Apple Developer Program portal, as well as an over-the-air (OTA) update for those who prefer the simplicity of doing everything on the device itself.

iOS 11: iOS 11 is undeniably Apple’s marquee release out of all of the software platforms that the company currently has in beta ahead of a major public launch. With millions of devices in circulation which will ultimately qualify for iOS 11, it’s imperative that Apple not only gets the features and functionality right, but that the company also delivers those features in a manner which pleases all device owners.

The previous iOS 11 beta release was a very good indicator that Apple is on the right path where stability and getting the platform ready for a major release is concerned. In addition to making the platform more stable and power efficient, beta 6 also introduced some fixes for some compatibility issues iOS 11 was having with major third-party apps and experiences, such as video streaming and handling in a number of popular apps, and even content synchronization with services like Amazon’s Kindle. Apple also paid particular attention to power management to ensure that iOS 11 is as power efficient as possible when it goes into circulation.

This newer beta carries on from all that good work to further streamline the experience in order to make it shipping quality in time for iPhone 8 release.

Compatible-Mac owners will be able to upgrade to macOS 10.13 High Sierra free-of-charge to benefit from major improvements to Safari, Photos, Mail, and many other stock apps installed as default. Apple has integrated machine learning processes throughout certain apps, including Photos, as well as making apps like Mail a lot more efficient when it comes to retrieving and storing emails. There’s also the adoption of the Apple File System (APFS) to bring it more in line with iOS.

watchOS 4: When you talk of Apple Watch in the same breath as iPhone, iPad, or Mac, you realize that watchOS has a relatively small install base comparatively speaking to the other platforms which power the aforementioned hardware. However, it’s still extremely important to those who love their Apple Watch.

The upgrades embedded within watchOS 4 are generally around the better organizing and exposing of workouts to the Apple Watch owner. Apple has introduced a more streamlined and slick workout experience through better user-interface and user-experience design, as well as exposing new quirky features such as animated watch faces, among other things.

tvOS 11: tvOS will likely have the smallest install base when the time comes, but that doesn’t mean that it carries any less importance. There has been talk of Apple introducing a 4K Apple TV in the future, but for the time being tvOS 11 will only be available to those with a fourth-generation Apple TV. Those hardware owners will get a version of tvOS with a new and improved dark and light mode as well as new functionality which will allow developers to builds richer apps through notifications and background privileges.

As mentioned earlier, beta 7 of iOS 11, macOS 10.13, watchOS 4 and tvOS 11 are all available to download from either Apple Developer Program portal, or directly as an OTA update from the settings section on the device itself.