Apple’s hastily-released HomePod firmware has already given us more insider information than we could have ever gained from individual leaks, but it isn’t finished yet.

The gift that keeps on giving is continuing to give, with more information filtering into the public domain, this time referencing the potential of an HDR 4K-capable Apple TV model, as well as an indication that Apple’s new facial detection on iPhone 8 could work even when the device is laid flat on table.

We haven’t had any notable updates to the Apple TV hardware for a while so that seems like the perfect place to start in this instance. Reports dating back to February this year have speculated about Apple working internally on a 4K Apple TV model, but, as yet, this hasn’t been confirmed or actually made it to market as a standalone product. A number of competing products have been offering 4K set-top boxes for years, which would suggest that Apple really needs to be coming to market with that sooner rather than later. The new strings found in the HomePod source seem to suggest that Apple’s new 4K Apple TV will support both HDR10 and Dolby Vision HDR, which means that Apple is really taking things seriously. We just need that official confirmation before we go getting truly excited.

Additionally, new strings have also been found in the HomePod firmware which reference “AXRestingPearlUnlock” with a com.apple string of com.apple.accessibility.resting.pearl.unlock. We know that Apple references the facial detection system on iPhone 8 as Pearl, with this string suggesting that this will be part of iPhone 8 Accessibility settings.

Referencing it through Accessibility doesn’t always mean that it will have to be turned on in Settings > General > Accessibility in iOS 11, but it’s potentially going to be introduced that way. We don’t yet have any hard evidence or clarity on how this feature will actually work, but it’s likely that iPhone 8 will adopt infrared technology to make the magic happen, even at awkward angles, such as when placed flat on tablet. 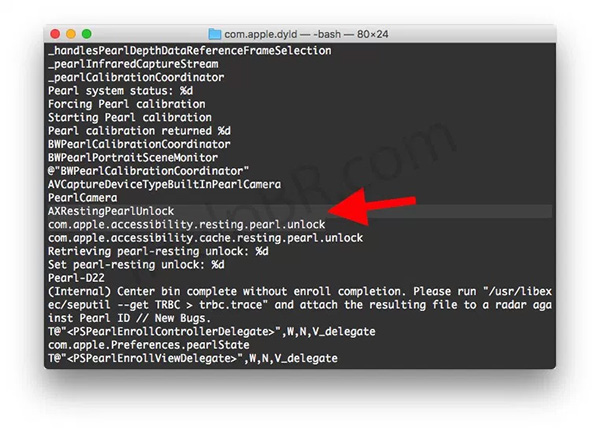 HomePod’s firmware also references “APPS_USING_PEARL” and “PEARL_AUTOLOCK”, which could point to Apple’s intentions of opening up the facial system to third-party developers, as well as an automatic security feature for locking the device.

We’ve already had more than enough information come out of the HomePod firmware which gives us an interesting insight into Apple’s future plans for specific devices. With that said, something tells us that there’s more to be found.