iOS device owners who constantly find themselves thirsty for knowledge, information, and new releases into the community will be delighted to know that Adam Donenfeld has signaled his intention to release a number of exploits prior to this year’s Hack in the Box (HITB) conference which will essentially allow downgrade from iOS 10.3.1 to iOS 10.2 for jailbreak purposes.

The Zimperium security researcher is all set to appear at this year’s Hack in the Box GSEC conference in Singapore later this month, where he will present a talk titled “Ro(o)tten Apples: Vulnerability Heaven in the iOS Sandbox.”

As part of the research for that talk, Donenfeld and his team at Zimperium managed to find multiple privilege escalation vulnerabilities within iOS which affect all devices on the market. That will, of course, be classified as valuable information, which is why Donenfeld has been questioned about whether or not those exploits would be released during or after the conference since they have now been patched by Apple.

His answer? Well, posting to Twitter, he basically alludes to the fact that he has plans to publicly release those exploits prior to the conference beginning on August 21. If that happens, it means that non-jailbroken device owners running iOS 10.3.1 will be able to downgrade to iOS 10.2 – which is a jailbreakable firmware – as long as they already have their iOS 10.2 SHSH2 blobs saved from the time when Apple was still digitally signing that particular version of iOS. 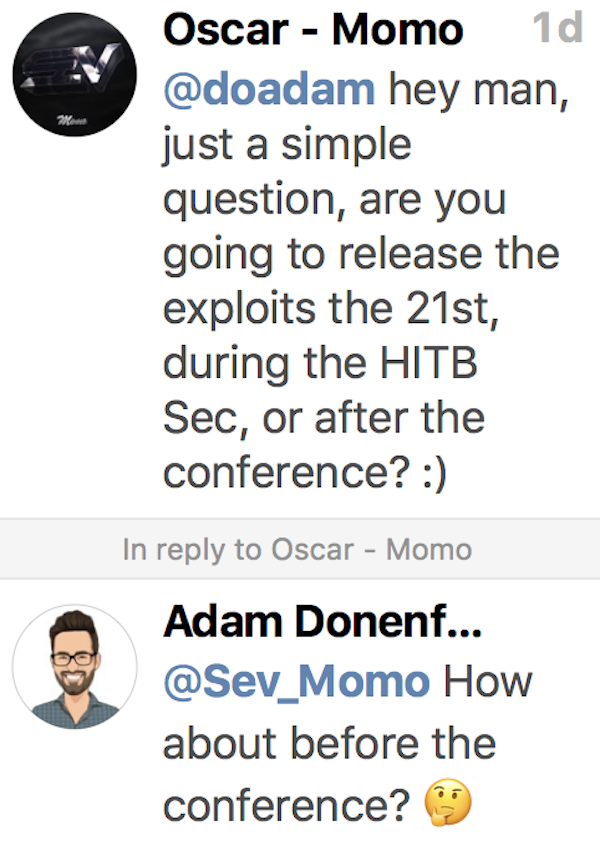 Previously, before these exploits were known or potentially available, the device would have needed to be jailbroken before a downgrade could take place using SHSH2 blobs, which obviously wasn’t possible from a firmware like iOS 10.3.1 as there wasn’t any jailbreak available for it.

If you are wondering why you’d want to go back from iOS 10.3.1 to iOS 10.2, the answer is very simple; the yalu102 jailbreak tool is a stable and functional semi-untethered jailbreak for that firmware. Downgrading means that you can instantly have access to a jailbreak and all of the benefits that it brings.

It doesn’t apply to everyone as there is still a requirement for those iOS 10.2 SHSH blobs to have been saved when Apple was signing iOS 10.2, but it’s definitely good news for those still sitting on iOS 10.3.1 who fulfill that criteria. We will be sure to bring more on the situation as it unfolds. Stay tuned.